On show: "Ten Series", photographs by Matthew Sleeth and "In Almost Every Picture", collected and edited by Erik Kessels. The exhibitions transform seemingly ordinary scenes into something extraordinary, something that changes our perception of the world around us, especially our world in pictures. 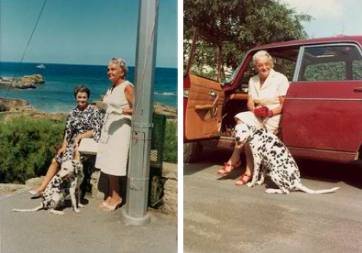 Ten Series and In Almost Every Picture transform seemingly ordinary scenes into something extraordinary, something that changes our perception of the world around us, especially our world in pictures. For both series, travel plays a role; these images underline two aspects of the photographic impulse—the creative and the commemorative—that often surface when we experience a new location that we want to preserve and share with others. Images that seem commonplace at first take on new weight and emotional charge as we isolate and re-examine them within the exhibition context.

Looking at Kessels’s and Sleeth’s work, we can’t escape an overwhelming feeling of déjà vu, that we’ve seen these pictures before or even made some that look similar. Today, almost everyone uses the camera to capture life in pictures; we take snapshots to create personal connections and to memorialize those connections. Both Ten Series and In Almost Every Picture reference the snapshot and, in so doing, engage the very nature of the photograph.

Australian photographer Matthew Sleeth (b. 1972) is a consummate observer, exploring the world around him with an acute and often humorous eye. With its range of typologies, Ten Series is varied and eclectic. Topics include Japanese women in uniform; tagged trees and plants in an arboretum; “red” China, where the commonality is the presence of red and the locale of China; and views of Mount Fuji, inspired by old Japanese prints, but taken from a modern vantage point. Through its casual exploration of these disparate themes, Ten Series offers a view of a contemporary world that is structured on somewhat arbitrary types, categories, and systems of classification, all the while making allusions to the role that photography has played in this process.

In Almost Every Picture is an idiosyncratic collection of found images from three volumes in the cult classic book series of the same title. The Spanish Woman features photographs taken by a husband of his wife during the years 1956–1968; Twins features pictures of two sisters, who always appear dressed in identical outfits, taken in Europe during the 1940s; in Dalmatian, a beloved dog and her owner grow old together while walking through various European locations; and Taxi is comprised of photographs taken by a taxi driver of his car and passenger at different “holiday spot” locations. Kessels (b. 1966, Amsterdam) culled various themes from thousands of found images appropriated from hundreds of different sources and anonymous recorders. In Almost Every Pictureunderscores the notion that photographs are physical objects that attract continual interpretation beyond their first intended purpose; the significance of photographs can evolve as their lifespan increases. As Kessels gives these pictures a reprieve from anonymity, we receive a privileged look at private memories that have, in their new context, become profoundly enigmatic, and at times sublime.