Death and the River. Since 1995, his disturbingly beautiful videos and photographs address the dread and human waste of the endless drug war in Colombia where the army, the guerillas and paramilitaries perpetuate the cycle of violence. Artist mades multiple journeys documenting the changing tombs. 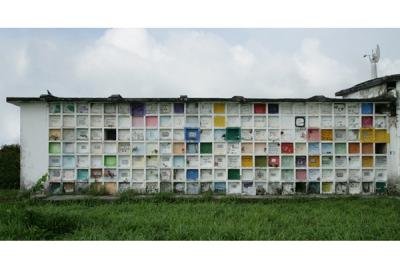 Josée Bienvenu gallery is pleased to present Death and the River, an exhibition of photographs by Juan Manuel Echavarría. Since 1995, his disturbingly beautiful videos and photographs address the dread and human waste of the endless drug war in Colombia where the army, the guerillas and paramilitaries perpetuate the cycle of violence.

In November of 2006, Juan Manuel Echavarría visited a cemetery in Puerto Berrío, on the banks of the Magdalena River in Colombia. Within the cemetery, a particularly colorful mausoleum stands apart from the others. The tombs are marked with the letters NN: Ningún Nombre—No Name. Within each tomb lies a corpse or part of a corpse that the people of Puerto Berrío have rescued from the Magdalena River. Most are victims of massacres from the drug war, many mutilated, many simply discarded for convenience, anonymity, to feed the vultures. But here the people save the nameless and decomposing bodies from the waters and bury them in the cemetery. Then they perform a second ritual. A NN can be “escogido”—chosen—by a person who agrees to take care of its tomb, to pray for its soul, in exchange for favors from the dead. The blessed one adopts the NN, decorates the tomb with flowers and often a marble slate saying, "Thank you NN for the favor received." Some caretakers even name their NN, often granting them their own family name, inscribing the given name on the marble.

On one level, the living make a business-like proposition with the dead: In return for a favor, I will keep up your tomb, decorate it, paint it, bring a glass of water so your soul will not be thirsty, bring you flowers, humanize you by giving you a name. But collectively they are saying, we won’t let the violence erase you, we snatch you away from those who have made you disappear, we take care of you, we give you names. Their pact with the dead is to resist the perpetuators of violence as a reconstruction of the social fabric. (Juan Manuel Echavarría, 2007)

Echavarría made multiple journeys documenting the changing tombs. The exhibition offers close-up photographs of the tombs in a rectangular grid arrangement recreating the original structure of the NN mausoleum. Among destruction and death, the NN mausoleum is a record of a unique gesture of humanity.