Mary Ellen Strom & Ann Carlson, Gregory Halpern, Jill Magid, Joanna Malinowska. A group show that explores the role-playing that goes hand in hand with having an occupation. The results cast a wide, allegorical net, eliciting pathos from the absurd and the mundane. 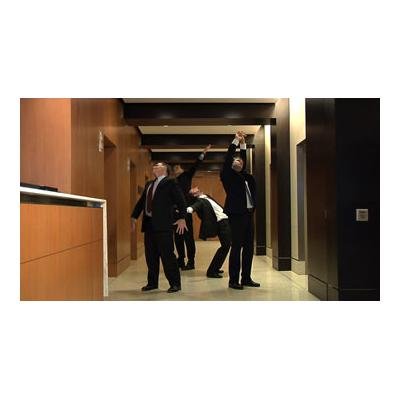 Momenta Art is pleased to announce the opening of Working Title, a group show that explores the role-playing that goes hand in hand with having an occupation. Though each of the four artists presented here documents a very particular occupation, the results cast a wide, allegorical net, eliciting pathos from the absurd and the mundane.

Jill Magid's project, in collaboration with the Dutch Secret Service, examines the power and sexuality implied through systems of secrecy. Mary Ellen Strom and Ann Carlson's dance/vocalization video features four working lawyers who, in collaboration with the artists, choreographed a performance using the daily acting and emoting required by their profession. Greg Halpern's series of photographs and interviews with Harvard service workers reveals the inequality upon which such liberal institutions depend. And Joanna Malinowska interviews an Inuit Elvis impersonator, the "Arctic Elvis," who reveals the nature of his calling: to bridge his own culture with that which has absorbed him.

The earnestness of this Elvis raises questions we all have about work, about its greater purpose, about whether we shape it or it shapes us. In essence, these are formal questions, but they are questions with a performative, never-ending answer.

Gregory Halpern received an MFA from California College of the Arts in 2004. He has had solo exhibitions at Anderson Gallery, Buffalo, NY, The Warehouse Gallery in Syracuse, NY, and San Francisco CameraWorks, CA. Harvard Works Because We Do was exhibited at The Carpenter Center for Visual Arts at Harvard University in 2003.

Jill Magid received a MS in Visual Studies from the MIT in 2000, and her BFA from Cornell University 1995. She was a resident artist at the Rijksakademie in Amsterdam 2000-2, and currently lives and works in both Amsterdam and Brooklyn. Solo exhibitions include With Full Consent at Gagosian Gallery, New York, Sparwasser HQ, Berlin, Centre d'Art Santa Monica, Barcelona, Stedelijk Museum Bureau, Amsterdam.. Her work has been included in group exhibitions at Storefront for Art and Architecture, New York, and De Appel, Amsterdam.

Joanna Malinowska received an MFA from Yale University in 2001 and a BFA from Rutgers State University in 1998. She has had solo exhibitions at 20 Spojrzen (20 Gazes), Warsaw, Poland, Venetia Kapernekas Gallery and Canada, New York. Her work has been exhibited in group show both nationally and internationally.