Painting the Glass House: Artists Revisit Modern Architecture; the exhibition brings together two-dimensional works (including video) in various media by some artists. Halsey Burgund: Round, an audio installation. Gary Panter: Daydream Trap, his sketchbooks and his paintings. Ester Partegas: The Invisible, a site-specific installation. 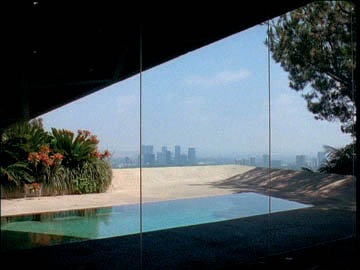 Modern architecture is generally identified with buildings by Le Corbusier, Philip Johnson, Mies van der Rohe, and Frank Lloyd Wright, which represent a period driven by developments in technology, engineering, and the introduction of industrial materials such as iron, steel, concrete, and glass. Architects at this time engaged in a practice that not only incorporated structural innovations, but also encouraged social change.

The artists featured in the exhibition are interested not only in the potential of utopian ideas, but also the sense of a passing idealism that modern architecture now embodies. Hough comments, “The artists are less interested in the built structures themselves and what it might feel like to be inside one, and more interested in the philosophy and idealism they represent. The way in which the buildings signal a possibility of utopia is essential—a future that could have been. Sentimentality runs through much of the work.”

Ramírez-Montagut adds, “This melancholic remembrance comes at a time when great works of modern architecture are at risk due to neglect, deterioration, and demolition. Underlying all the artworks is a feeling of deep admiration for the architects who sought to elevate culture and bring it to the broad masses, yet their sense of failure is also prevalent; the artists’ knowledge of modern architecture’s crisis and demise tints their works with some kind of nostalgia.”

The Aldrich will host an Exhibition Reception on Sunday, March 9, 2008, from 3 to 5 pm. Prior to the opening there will be a 2 pm Panel Discussion: Painting the Glass House: Artists Revisit Modern Architecture, with curators Jessica Hough and Mónica Ramírez-Montagut, along with artists Daniel Arsham, Angela Dufresne, and Terence Gower. The reception is FREE for members. Refreshments will be served. Round-trip transportation from New York City is available; please call the Museum at 203.438.4519 for reservations. Please note that the bus will not arrive in time for the panel discussion. The reception and panel will take place at the Museum located at 258 Main Street, Ridgefield.

A book related to the exhibition is being co-published by The Aldrich Contemporary Art Museum, Mills College Art Museum, and Yale University Press, and is scheduled for a fall 2008 release.

ROUND is an audio installation that will solicit spoken voice contributions from visitors and use them as part of a musical composition intended to be listened to while viewing the work on view in the galleries. The interactive audio experience will allow visitors to hear a diverse range of voices—artists, curators, and visitors—sharing their perspectives about the exhibitions and to add their responses. The comments will be collected in a database of recordings and subsequently incorporated into the piece. Thus, there will be a continual loop of opinion and emotional response, all contained within a musical work. The flexible infrastructure developed and built for the installation will be the basis for future audio tours at the Museum.

Daydream Trap will be Gary Panter’s first solo museum exhibition, exploring two facets of the artist’s career: his sketchbooks, which are the spawning ground for many of the artist’s ideas; and his paintings, which are a significant part of his artistic output, yet have never been put in critical perspective.

Panter’s work, which is difficult to easily categorize, has appeared in (among other places) Art Spiegelman’s groundbreaking graphic magazine RAW, television’s Pee Wee’s Playhouse (three Emmy awards for set design), and numerous major book projects. In 2000 he was the recipient of the Chrysler Design Award, an annual award that acknowledges individuals from the world of design that have significantly influenced American culture. In 2005 Panter’s work was included in the traveling exhibition Masters of American Comics that was organized by UCLA Hammer Museum and LA MoCA.

Ester Partegàs will present the first work in the Main Street Sculpture Project for 2008 with her site-specific installation, The Invisible. Inspired by the original use of the Museum's historic "Old Hundred" as a general store, the artist will transform the façade of the administration building with an illuminated awning based on the designs that grace countless bodegas and convenience stores in American cities. Instead of the usual bodega signage, Partegàs's intervention will feature text that poetically reflects on the experience of visiting an art museum. The work ingeniously plays with the awning's change of context: urban/suburban, Latino/Anglo-Saxon, and food store/art store. The awning will also shelter the front steps from the elements, providing a "porch" for strolling citizens to congregate and socialize.