Samples from the history of the Matrix Program 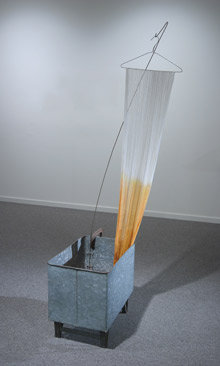 Over the past thirty years, with more than 220 exhibitions, the Berkeley Art Museum’s acclaimed MATRIX Program has charted a unique course through the landscape of contemporary art. From the beginning, MATRIX has been a space of active engagement with living artists, a progressive stance at the time of the program’s founding in 1978, when most museums made contemporary art the subject of their inquiry only infrequently. For then museum director James Elliott, who introduced and developed the idea during his tenure at the Wadsworth Atheneum in Hartford, Connecticut, before bringing it to Berkeley, the continuous (and, in the earlier days, also overlapping) exhibitions of contemporary art in the MATRIX Program were meant to be viewed as “discrete units in a cumulative and ongoing statement reflective of the wide range of ideas being explored by today’s artists.”

The spontaneity and flexibility afforded by the small-scale, short-term MATRIX format was key to engendering experimentation on the part of both the artists and the institution, resulting in a mix of exhibitions that defied categorization and kept Berkeley at the forefront of international contemporary art. Many artists had their first major exhibition in the MATRIX Program, and many have gone on to great prominence in the field. Past participants include Doug Aitken, John Baldessari, Jennifer Bartlett, Georg Baselitz, Jean-Michel Basquiat, Louise Bourgeois, James Lee Byars, Sophie Calle, Jim Campbell, Bruce Conner, Willem de Kooning, Richard Diebenkorn, Peter Doig, Peter Fischli and David Weiss, Nan Goldin, Felix Gonzalez-Torres, Eva Hesse, Robert Irwin, Alfredo Jaar, Sol LeWitt, Tom Marioni, Chris Marker, Elizabeth Murray, Charles Ray, Susan Rothenberg, Richard Serra, Ed Ruscha, Allan Sekula, and Cindy Sherman, to name just a few. Nearly every major museum in the country now has a project-based contemporary art program similar to MATRIX, a testament both to the prescience of James Elliott’s vision and to the increasing prominence of contemporary art in society.

MATRIX was a key force in introducing many important contemporary artists to Bay Area audiences, and in supporting the careers and raising the profiles of Bay Area artists in the context of international contemporary art. The legacy of this influence lives on in the museum’s collection, which includes works by a majority of the artists who have exhibited in the MATRIX Program, and in the collections of patrons who have supported the museum over the history of the program.

MATRIX/REDUX, on view in Galleries 1 and B, samples from the history of the MATRIX Program with selections from the BAM/PFA collection and loans from local collections rarely seen by museum audiences. The exhibition places special emphasis on new gifts and acquisitions, such as Kiki Smith’s Crèche (1997), a recent gift from Richard and Lenore Niles. At the time of her MATRIX exhibition in 1994, Smith was best known for her exploration of the body, inside and out, through a variety of media, including wax, bronze, glass, fabric, and paper; she was just beginning to expand her focus to cosmological and natural phenomena. In Crèche, a menagerie of phosphorous bronze animals—fox, deer, bats, mice, rabbits, and owls—form their own colony of creatures suggesting spirited powers of transformation. “Art is about being curious. About knowing how things hold meaning—trying to make sense of oneself, one’s environment,” Smith has said.

MATRIX/REDUX serves as the beginning of a year of events to mark the thirtieth anniversary of the program, including a series of public conversations between past MATRIX artists and curators Michael Auping, Constance M. Lewallen, Lawrence Rinder, and Heidi Zuckerman Jacobson.

BAM/PFA will mark the thirtieth anniversary with a year of programs, beginning with MATRIX/REDUX (on view through July 6), an exhibition that samples from the rich history of the MATRIX program with selections from the BAM/PFA collection and loans from local collections rarely seen by museum audiences.

On April 25, BAM/PFA celebrates the MATRIX program with a birthday party, featuring special guest David Ireland, and including a collaborative performance with Deerhoof and future MATRIX artist Martha Colburn.

A year-long series of public conversations between past MATRIX artists and curators will begin with Heidi Zuckerman Jacobson and painter Peter Doig on April 27.

Other talks include Constance M. Lewallen, Larry Sultan, and Mike Mandel on June 22; Lawrence Rinder and Nayland Blake on October 19; Michael Auping and Susan Rothenberg on November 2; and Elizabeth Thomas and Paul Chan in January 2009.

In Spring 2009, at the end of the year of programs, BAM/PFA will publish a book gathering these live conversations, as well as selected artist conversations convened specifically for publication. To mirror the spirit of the program, New York-based designers Project Projects have been commissioned to generate an archival framework that contextualizes the totality of the MATRIX program’s eclectic history. Together, these dual aspects of the book will produce new reflections on the program and the artists who shaped
its history.

The MATRIX Program at the UC Berkeley Art Museum is made possible by a generous endowment gift from Phyllis C. Wattis.