Bookstore Cure. Eloyan is noted for his large-scale, heavily impastoed, brutally energetic paintings that combine caustic humour with the portrayal of a dark interior world peopled by an unruly set of animals and cartoon characters. 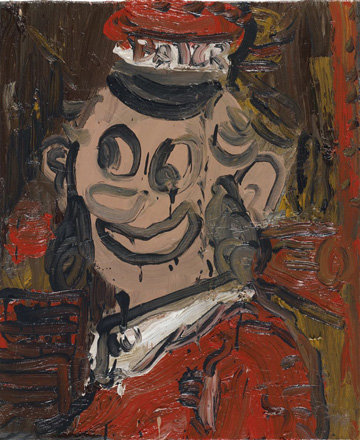 Timothy Taylor Gallery is pleased to present a new series of paintings by the Armenian born painter Armen Eloyan, in his first solo exhibition at the gallery. In 2007 Eloyan was the subject of an acclaimed solo show at Parasol unit foundation for contemporary art in London, and will soon be the subject of a solo exhibition at the Kunst Halle Sankt Gallen, Switzerland in April 2008.

Eloyan is noted for his large-scale, heavily impastoed, brutally energetic paintings that combine caustic humour with the portrayal of a dark interior world peopled by an unruly set of animals and cartoon characters. Violence and danger seem to lurk just beneath the surface: Artforum described them as ‘a battlefield straight out of Goya’. In some of the largest paintings in the exhibition, Eloyan depicts his characters holed up in the claustrophobic interior of a wooden cabin, in which tiny windows provide no escape. The sense of oppression and impending doom is increased by the ostensibly comedic subject matter. In Back and Forth (2007), two Minnie and Mickey figures are busy with a domestic washing and ironing scene, but the viscerality and energy of the painting suggests darker undercurrents and themes. In (Bunch of a Story) Tea Table (2007/8) - two Krazy Kat characters are manically having tea, while in Bear and Dog (2007), the largest painting in the exhibition, the two figures seem to literally act as embodiments of Eloyan’s curious mixture of pathos and aggression expressed in paint. Eloyan is also a master of multi-layered imagery as he piles brushstroke onto brushstroke in a whirling chaos of description. Enigmatic details come in and out of focus, often only revealing themselves after several viewings.

Eloyan uses a very different technique for his smaller paintings, which often isolate single objects, and give them a profound resonance. In Clown Shoes (2008), a pair of Max Wall shoes resembling blackened bananas create a fine balance between humour and pathos - set against a swirling abstract background they have a terrifying existential dimension. Eloyan’s blend of humour, storytelling and suppressed violence provides a beguiling and terrifying vision worthy of Franz Kafka and Philip Guston, and is ultimately a powerful reminder of the power of paint to suggest the energy and turmoil of life.

Armen Eloyan was born in Armenia in 1966. He lives and works in Zurich and studied at the Rijksakademie in Amsterdam. His work is held in public and private collections in Europe and North America. In addition to his forthcoming shows at Timothy Taylor Gallery and the Kunst Halle Sankt Gallen, Eloyan is currently exhibiting in a group show at Glasgow's Transmission Gallery.