The exhibition presents experiences of social solidarity as well as isolation and margimalization, translated here into spatiality: into a kind of architecture of emotions where the works of the artists also turn a spotlight on the more unexplored regions of psychogeography. Curated by Mats Stjernstedt. 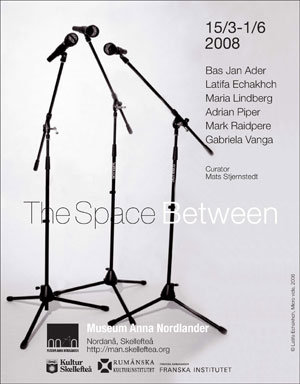 The exhibition The Space Between addresses certain dynamics where simple gestures suggest an alteration and a politicization of temporal and spatial conditions inherent in the work and between the artwork and the viewer. This is manifested both in the content and in the formal structure of the work.

The artworks presented involve aspects including the politics of identity and language reinterpreted in concepts such as dimension and distance, spatial transformation and temporal shifts – but also psychological distances in the form of flights of fancy, changes in mentality and reverie.

The exhibition presents experiences of social solidarity as well as isolation and marginali­zation, translated here into spatiality: into a kind of architecture of emotions where the works of the artists also turn a spotlight on the more unexplored regions of psychogeography. This can be seen converted into a multitude of different formats – moving pictures, text, sculpture, animation, linguistic translations and musical interpretation – transforming the slightest object, image or everyday situation into a subject of sociological debate.

The Space Between attempts to raise issues of the construction of identity in transit, in rupture, between different cultures in a globalized reality and, furthermore, as examples of emotions of alienation in a complex, contradiction-filled world. Nevertheless, The Space Between consists of equal proportions of humour and melancholy. The works often play on inequalities and claims to power in relations, and on failures primarily based on misunderstandings of the mind, the deceptions of language and the limitations of the body.

Museum Anna Nordlander is a meeting-place for gender issues and contemporary art. The Space Between will inaugurate Museum Anna Nordlander Konsthall on occasion of the opening week of Nordanå, March 14 – 19. During these days a wide range of creative activities, lectures and performances will be offered.

Nordanå is a cultural center and recreation ground in Skellefteå with art galleries, museums, theater, museum shop and café.