A Canary in a Coalmine. The artist presents a series of installations - sculptures, architectural settings and photo works - in which he explores the ambiguities of "the architecture of security". In doing this, Lenglet builds on the strategy of Minimalism with its characteristic rudimentary, geometric forms and basic materials. A good example of the way he works is a sculpture that with its cruciform shape is directly inspired by the aggressive appearance of anti-tank barricades. His crosses are subtly assembled from relatively fragile aluminium profiles. 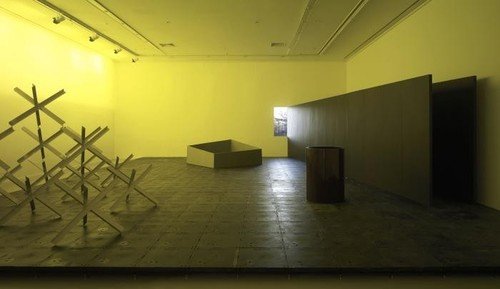 With the exhibition 'A Canary in a Coalmine' this Spring at Stedelijk Museum Bureau Amsterdam, Lucas Lenglet continues a series of installations in which he explores the ambiguities of 'the architecture of security'. The paradox noted by the German philosopher Rüdiger Safranski could serve as the point of departure for this series: the safer a society becomes, the greater its fear of threats. This is a given that Lenglet works out in an idiom all of his own, in sculptures, architectural settings and photo works.

In doing this, Lenglet builds on the strategy of Minimalism with its characteristic rudimentary, geometric forms and basic materials. A good example of the way he works is a sculpture that with its cruciform shape is directly inspired by the aggressive appearance of anti-tank barricades. But Lenglet's use of materials is much more seductive. His crosses are subtly assembled from relatively fragile aluminium profiles. A soft yellow light gives the aluminium a mysterious glow.

A second element of his strategy, which is somewhat related to the post-minimalism of, for instance, Bruce Nauman in the 1970s, is his involvement of the viewer. That is certainly the case in his spatial installations, such as those realised last year in a project space of Palais de Tokyo in Paris, and now in Stedelijk Museum Bureau Amsterdam. The environments surround the visitor; within these spaces narratives unfold, based on images and structures that are derived from the architectonic formal language of security, such as hoardings, roadblocks, specific lighting fixtures, fences and cages. But Lenglet avoids the street aesthetics. Every component is worked out with the same precise feeling for detail, texture, colour and lighting. In this way he invests the raw formal language of security, which often implies threat and danger, with a high degree of intimacy. If Lenglet's work can be regarded as a visualisation of the increased state of vigilance in Western society, at the same time he uses the aesthetic means of the sculptor to create a sort of dramaturgy of trust to accompany it.

Despite that, the work preserves its cool sovereignty. Lenglet provided another fine example of this with a sculpture for public space, which has stood in both the Renaissance city of Zamość in Poland, and in Potsdam, with its post-war plattenbau. The work, ‘Columbarium’, was comprised of a stark cylindrical form inspired by the shape of a 16th century dovecote (or columbarium), built from brick nogging which lent it an open, airy character that contrasts with the charged symbolism of a funerary columbarium, the word's other meaning. In Zamość the sculpture, built of local brick, had a strong historical connotation; in Potsdam it stood in sharp contrast to the concrete residential blocks, at the same time becoming a symbol for their reticence. Nevertheless the six-meter-high sculpture became a warmly-regarded meeting point for people from the neighbourhood, as if it shared their destiny.

The language of security, the implication of danger and the symbolism of fate are also the thread running through the exhibition 'A Canary in a Coalmine' in Stedelijk Museum Bureau Amsterdam. The title refers to the canaries that were once used as indicators for build-ups of poisonous gasses such as carbon dioxide or methane in mines. Canaries are more sensitive to these than humans are; at the point where the canary fell dead, the mineworkers still had enough time to flee the claustrophobic mine passages. The chirping bird is thus also an indicator for the kind of experience that Lenglet created in Stedelijk Museum Bureau Amsterdam. Work by two other artists, the painter Tjebbe Beekman and designer Willem van der Sluis/Customr, is also to be seen in the show.

Lucas Lenglet (b. Leiden, 1972) graduated from the Gerrit Rietveld Academy in Amsterdam in 2000. Since then he has participated in various exhibitions in The Netherlands and elsewhere. 'A Canary in a Coalmine' is part of a series of works and installations about security and violence. Previous exhibitions from the series took place in Künstlerhaus Bethanien, Berlin ('Tools for Rescue / Tools for Hiding', 2006) and Palais de Tokyo, Paris ('Inaccessibilité et connecteurs hiérarchiques', 2007). In addition, Lenglet was a participant in the exhibition in public space, 'Ideal City – Invisible City', in Zamość and Potsdam (2006). Last year he also realised a temporary installation on the Rosa-Luxemburg-Platz in Berlin. An essay by Roger Bundschuh will be appearing in SMBA Newsletter nr. 103 to accompany 'A Canary in a Coalmine'.