No Letters investigates the dissemination of public information through various forms of reportage, carried out on both a local and a global level. Each contributing artist has made work that seeks to debunk the way we receive news of current affairs, gossip, advertisements and everyday instructions, revealing the truths obscured beneath the familiar yet effective tactics of distraction and deception employed by the media today. Curated by Leigh Clarke. 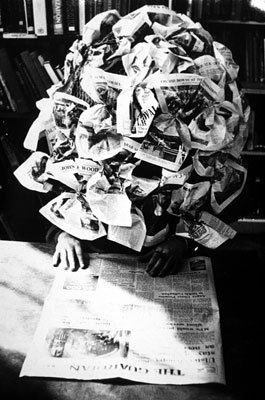 No Letters investigates the dissemination of public information through various forms of reportage, carried out on both a local and a global level. Each contributing artist has made work that seeks to debunk the way we receive news of current affairs, gossip, advertisements and everyday instructions, revealing the truths obscured beneath the familiar yet effective tactics of distraction and deception employed by the media today.

No Letters is the third in a series of interlocking projects organised by the artist Leigh Clarke. The book and exhibition borrows its title, as does that of the related from the first headline spoken by the spoof newsreader in Ian Breakwell's 1980 film, The News. Breakwell’s presenter, broadcasting from a local TV station, delivers a series of mundane news items, including stories about old people leaving an auditorium and reports about the sudden appearance of holes in the road. As well as implicitly calling up the issue of the relationship between visual and textual images, the term “No Letters” punningly alludes to the fact that the first draft of the book’s running text went astray in the 2007 postal strike; fortunately its author had retained a copy of his work.

Ian Breakwell’s combination of found newspaper articles and handwritten text in the 1969 Diary and the for-mentioned film The News, show Breakwell’s extensive intrigue in the banality of modern life through various forms of reportage. The 1969 Diary is one of the artist’s earliest multi-media entries into his life-long diary that he obsessively worked on until his death in 2005. Solo exhibitions include Diagnosis, Anthony Reynolds Gallery London; The Other Side, Tate Britain London; The Word Is, Anthony Reynolds Gallery London; Deep Faith, 291 Gallery London; Monk, Temple Bar Gallery and Studios Dublin; The Other Side, De La Warr Pavilion Bexhill; Auditorium (in collaboration with Ron Geesin), Broadway Nottingham and Bellring (in collaboration with Ron Geesin), Durham Cathedral.

Leigh Clarke’s paintings communicate good news out of bad news. He has created a font out of negative headlines used to advertise the Hackney Gazette and then made news about positive happenings that occur everyday in the area. The work twists the media-tactic of scare mongering to sell news on its head. His work has been exhibited in the John Moores 24 Painting Prize, Gasworks Gallery, Frieze Art Fair (Resonance FM stand), Fieldgate Gallery, Museum of Breda, LOKAAL01 Holland, Le BLAC Brussels, Keith Talent Gallery and Contemporary Art Projects. He has made numerous performances including those at The Art Car Boot Fair, Resonance FM, Alma Enterprises, Hales Gallery and Keith Talent Gallery.

In Library Bingo by Lucy Harrison, the artist replaces bingo calls with library book titles from the Lincolnshire Libraries Collection in the North Parade Social Club, Skegness. Reclaim the Night is a documentation of a walk taken in 2006 in Leeds, retracing the steps of the original 'Reclaim the Night' women's march in 1977. The campaign was initiated in response to the police advice during the time of the Yorkshire Ripper murders that women should stay indoors after dark, and called for safer streets and an end to 'curfew mentality'. The 2006 walk was in the company of Al Garthwaite, organiser of the 1977 march, and Katy Rochester, curator at Leeds City Art Gallery. Harrison’s work has been included in Hope and Despair, Cell Project Space London; O Dreamland, Greatstone Kent; Transition Gallery / Club Shepway, Post Paulo Futurum Museum of Breda / Lokaal 01, Breda, Netherlands?, GIFT Museum MAN Liverpool, Rag and Bone, Three Colts Gallery, London; Tres Riches Heures Lokaal 01 Breda / Le BLAC Brussels & Keith Talent Gallery, London.

Conor Kelly’s film Gazette uses the cassette recordings of elderly volunteers who read the news in the Hackney Gazette for the blind or partially sighted. With the audio of his elderly collaborators Kelly has revisited the site of these reports and has collected footage much like a lo-fi TV news crew who frame their cameras on the site where we know the horse has already bolted.
His solo exhibitions include Aerophone, Green On Red Gallery, Dublin; Mercer Union, Toronto; Sound&Music, Fordham Gallery, London; Plainsong, Peer Gallery, London; Conor Kelly, ON Gallery, Poznan, Poland.

Bob and Roberta Smith’s hand written slogans project an instantaneous truth about the newspaper image underneath. The works peel back the layers of tabloid journalism, revealing his own take on the unrealistic, over-exaggerations of daily journalism in what he calls Newspaper Poems. Solo exhibitions include Hales Gallery, The Baltic Newcastle, Galerie Praz Delavallade, Paris, Anthony Wilkinson Gallery and Pierogi 2000 New York. He has his own radio show on Resonance FM and has had two books published by Black Dog on his work entitled Make Your Own Damn Art and Art U Need: My Part in the Public Art Revolution.

Peter Suchin is an artist, critic and curator. He has contributed to numerous British and international journals, including Art Monthly, Art Press, Art Review, Frieze and Mute. As part of his contribution to No Letters, Suchin has included a miniature exhibition, Planchette, curated by Suchin in 2007 and presented within a mechanical display device or "Pagivolt". The selected artists are Vic Browne, Mik Godley (with Graham Lester George), Matt Hale, Lee Holden, Lizzie Hughes, Liane Lang, Stephen Lee, Pat Naldi, Sarah Sparkes, Jo Stockham, and Suchin himself. An explanation of the work is available in the exhibition.

The book “No Letters” is available from the gallery and is supported by The London College of Communication and LOKAAL01, Breda.