Carrousel. In his work, Holler creates situations which question familiar forms of perception and allow exhibition visitors to experiment on themselves, often inviting the public's active participation. For this show, the artist stages a circuit of seduction and doubt, evoking experiences of circular movements, repetitions, hallucinations, and accompanying uncertainties. Illuminated by rotating and blinking objects, a world of play and illusion is created, in which the apparent logic of the orderly coordination of our senses is overwhelmed by ingenious installations. 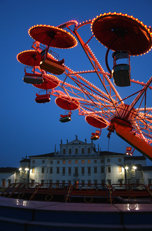 The internationally renowned German artist Carsten Höller (born 1961 in Brussels, Belgium; lives and works in Stockholm, Sweden) has been artistically active since the beginning of the 1990s. Before that, he was completing his PhD in agricultural science, specializing in the area of insect communication strategies. In his work, Höller creates situations which question familiar forms of perception and allow exhibition visitors to experiment on themselves, often inviting the public's active participation. The concurrence of art and "self-experimentation," focusing on the phenomenon of the human's perceptual senses and associated construction of the self, distinguishes his work, in that Carsten Höller is never concerned with achieving results but rather with offering possibilities of personal experience. An example is "Das Phänomen Phi" (1994), which facilitates an experience of the phenomenon of sense deception and takes up psychologist Max Wertheimer's experiments with the perception of non-existent movement, so-called "apparent movement." In contrast, the "Umkehrbrille" (1994/2001/2007) pays tribute to the psychologist George Stratton and his first experiments with sight, using upside-down spectacles. In 2007, on the occasion of the performance of the opera "Il Tempo del Postino" in Manchester, Höller's contribution involved willing volunteers wearing glasses for eight days, which turned everything upside down, as Stratton had also done in 1896 in an experiment on himself in order to find out if the brain could adjust to seeing upside down. In their form, Höller's works are occasionally reminiscent of scientific laboratory arrangements, allowing the viewer to become the subject of an experiment, for example creating the possibility to fly through the air in circles, immerse their head in an aquarium or, with the help of upside-down spectacles, experience the world completely differently.

As early as 1993, Höller took part in the Aperto show at the Venice Biennial, where he again exhibited in the Swedish Pavilion together with Miriam Bäckström in 2005. In 1997, the "Haus für Schweine und Menschen," a building for pigs and people, which was created for "documenta X" in Kassel together with Rosemarie Trockel, not only put the life of pedigree pigs on display, but also the behavior of people. Höller's works are deliberately aimed at facilitating experiences which transcend the field of art, as with the gigantic slides he installed in Tate Modern's turbine hall in London in 2006. The exhibition "Carrousel" at Kunsthaus Bregenz involves five interrelated works of rotating and repeating elements, i.e. the experiencing of circular movements and endless repetitions through the deployment of optical stimuli. On the ground floor, visitors will find, in the form of a readymade, a huge carrousel measuring 17 meters in diameter ("R B Ride," 2007). The 12 gondolas, which slowly rotate up to the ceiling and then down again to their starting position, each provide space for two passengers. A whole 15 minutes is required for one rotation, during which the passengers are trapped within the gondolas. On the first floor, visitors encounter an overwhelming light space, which creates the impression of the room itself rotating. Around the walls there is a 2-meter-wide strip consisting of tens of thousands of white flashing diodes. Each of the four walls blinks sequentially several times per second, thus creating a circular movement and provoking within the viewer hallucinatory after-images and color perceptions of red, blue and green. The space on the second floor is optically divided diagonally, whereby on the one side the walls are mirrored and on the other side not. The illusion of rotation is created through the continual toggling of the viewer's own reflection in the mirrored corners of the space. The empty unmirrored half of the space and the viewer are simultaneously inverted in the mirror and through a double reflection also appear the right way round. For this, Carsten Höller has recycled the mirrored space created by Daniel Buren for Kunsthaus Bregenz in 2001 along with all its accumulated traces of use.

For the third floor, Höller has constructed the "Drehendes Hotelzimmer," a revolving hotel room. This consists of four glass disks arranged one above another, which, barely perceptible to the viewer, counterrotate in slow motion. It is equipped just like a hotel room with sleeping and working areas; interested visitors can book a single or double room for one night on Fridays or Saturdays and so have the exhibition and Kunsthaus Bregenz completely to themselves for a whole night.

Like a view out of a hotel room window, which the Kunsthaus does not possess, a view of the surroundings and the "Fliegende Stadt" is provided on the third floor by means of a projection screen. A view of Bregenz, Lake Constance, and the mountains from the roof of the Kunsthaus is transmitted by a rotating video camera. In the projection's foreground, the "Fliegende Stadt" can be seen with its seven rotating towers, a transparent construction based upon Russian architect Georgi Krutikow's 1928 thesis, whose utopian vision was of a flying city, where people would live and work, returning to earth only for recreation.

For Bregenz, Carsten Höller stages his most comprehensive solo exhibition in Austria to date, a circuit of seduction and doubt, evoking experiences of circular movements, repetitions, hallucinations, and accompanying uncertainties. Illuminated by rotating and blinking objects, a world of play and illusion is created, in which the apparent logic of the orderly coordination of our senses is overwhelmed by ingenious installations.