With a wealth of photos, installations and objects, the exhibition shows the inspiration that contemporary artists all over the world draw from that space of the imagination which is Asia. 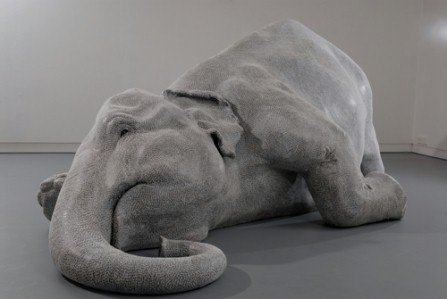 The continent on the other side of the Bosporus has always been an endlessly inspiring source of images as well as a screen for our projections. For a long time, however, only the Western view of a more-or-less Far East was accepted. How can we see Asia differently?

Today, Asia is experiencing a cultural awakening. From Bahrain to Beijing, new museums and art biennials are appearing. Asian art is now surrounded by total hype. Re-Imagining Asia examines the way in which new images of Asia appear in contemporary art. It is not the artists’ origins that are relevant for Re-Imagining Asia, but only their focus on Asia as a space for the imagination. The spectrum of artists ranges from Chinese artists such as Zhang Dali to the Thai artist Rirkrit Tiravanija, who was born in Buenos Aires and works in New York, to the Mexican Gabriel Orozco and the Germans Andreas Gursky and Johannes Kahrs. No matter whether their subject matter is the stock exchange in Kuwait, street scenes in mega-cities, pop imagery borrowed from the world of comics, or spine-chilling models of Tiananmen Square, the works selected from the twenty-three artists all develop new, heterogeneous ways of perceiving the world that transcend the polarities of local : global, traditional: modern.

Installations, objects and photographs form the focal point of the exhibition. And although the motives and materials fall back on traditions, the artistic strategies are absolutely contemporary. The artists examine the history of their societies, invoke love and suffering, express their sense of disquiet about the system, experiment with traditional forms and new media. Irony and enthusiasm go hand in hand, and new connections are established between contemporary and traditional phenomena. Re-Imagining Asia discovers its perspectives in these spaces of the imagination.

In situ
The Chinese artist Song Dong will be constructing his archives of past strategies of survival in the foyer of the House of World Cultures. His installation Waste Not (public assembling: 28.2.-13.3.) represents a vast revamping of all the objects his mother collected during the course of her life in the People’s Republic of China. In a commissioned work, Korean Sun K. Kwak responds to the transparent architecture of the House. And in April, performances will be staged in the garden around the House of World Cultures. Mai Yamashita and Naoto Kobayashi tackle the subject of infinity/eternity, OIO (Erika Matsunami and Antonis Anissegos) present a sound installation, and Megumi Fukuda makes artificial tulips flower in her Eternal Garden .

The curators: Wu Hung and Shaheen Merali
Re-Imagining Asia is the fourth project staged jointly by curators Wu Hung, who is Professor at the Center for the Art of East Asia in Chicago, and Shaheen Merali, a division head at the House of World Cultures. Together, the two curators produced the much-praised exhibition About Beauty (2005) and China – Between the Past and the Future (2006 at the House of World Cultures in Berlin and a section of the Gwangju Biennale in South Korea in 2006. In their Curatorial Statement they write: ‘These days, the cultural business is completely globalised. However, art often loses its contour in international exhibition practice, and without context it is depoliticised. Can Asian art be recontextualised? Which visual languages and traditions is Asian art taking up?’

Image: Bharti Kher, The Skin Speaks a Language Not Its Own 2006. Photo: Bartholomew/Netphotograph.com Image courtesy of the Artist and Nature Morte, New Delhi

Artist Talks
Sunday 16 March 2008, 1 p.m.
Artists of the exhibition on their works

Theme-related guided tours
of the exhibition Re-Imagining Asia
Every Sunday at 3 p.m.
€ 3 plus admission