Things that go dump in the night

The works of this international group collectively describe a world out of kilter. While some appear hewn from conflicting real and fantastical sensibilities others quietly leak the notion that something just isn't quite right. The status quo is referenced through objects, drawings and films in ways that undermine the socially accepted truths on which our experiences are founded. 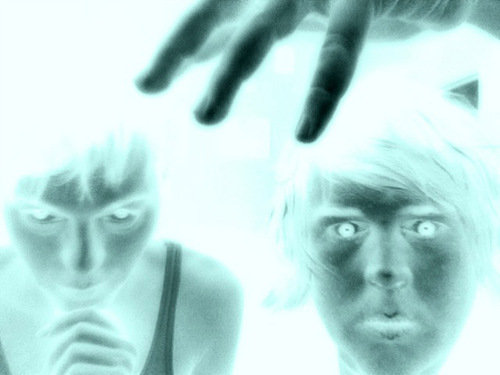 The works of this diverse international group collectively describe a world out of kilter. While some appear hewn from conflicting real and fantastical sensibilities others quietly leak the notion that something just isn’t quite right. The status quo is referenced through objects, drawings and films in ways that undermine the socially accepted truths on which our experiences are founded. The poetic, morally ambiguous line of an ancient Scottish prayer, to which selected pieces relate, or have been made in response to, was essentially designed to invoke protection from all that we fear: whether tangible perils or existential concerns. Today, though, it signifies more than being pricked by the sharp end of terror. Layers of theological, folklore, literary, film and musical references take us from the socially repressive undertones of the litany to the uncanny nature of gothic horror; from the accidental humour of Hammer and into the innumerable forms of popcultural pastiche that re-package the sentiment as a means of cultural critique.

Edwina Ashton’s anthropomorphised creatures and objects act out absurdist moments on paper and film that bear acute contemporary relevance despite the retrospecificity of her sources. Peculiar human interactions are fertile ground for John Hughes’s audio fiction in which humdrum tittle-tattle is punctuated with unexpected details that throw our voyeuristic position into sharp relief. Narrative characterisation reigns in the very different collage works of Jay Cloth, Kirsten Glass and the films of Lucy Pawlak. Where Cloth’s circus of misfits might have evolved from Dadaist experiments into paranormal activity, Glass’s glossy magazine femmes often appear like the glamorous victims of a hostage situation. Pawlak’s ‘one-man band’ approach to film making has resulted in a curious, scientifically observed cast of multiple personalities that (co)exist in a fractured realm beyond the everyday. The departed musician subjects of Paul Harper and Andrea Heller’s ‘Death Jukebox’ project, meanwhile, are very much of this world but the clairvoyant process by which these stars reveal their current musical tastes defies earthly logic.

Making processes collide in the hand-stitched works of Kent Henricksen and Loredana Sperini. Henricksen’s threaded lithographs describe abject folklore communities whose quasi-cutesy revelry is accented with modern symbology, while from Sperini’s slick graphical splurges human, animal and plant forms emerge like fashion ornamentation that refuses to comply with commercial stricture. The authenticity of art itself is appears under question in the works Anders Clausen, The Centre of Attention and Michael James Jones. Clausen trades on the resemblance of his disembodied heads on plinths to traditional figurative sculpture, to disarming affect, while through performative measures CoA force us to deconstruct how art is historicized and consumed. Jones’s manipulation of existing film footage both celebrates and alerts us the visual ruses made possible through data manipulation techniques.