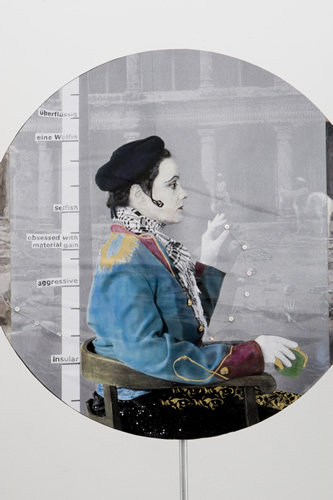 The "experimental method" of the images on display here repeats again and again a situation to which there is no solution. It makes out that it's able to build an instrument: an instrument to compensate the osmotic pressure of wealth when considering poverty. We must not identify poverty with the countries that I have travelled, and wealth with Europe, as if here there were no poverty and over there no wealth. On the other hand however, among these countries there is a history of exploitation which has carried them in an unmistakable direction, and a history of projections and nostalgia for the exotic which goes the opposite way. This history is part of the person who is watching, but she shares it with those who watch her.

Alice Creischer
Text which accompanies the work Apparatus for the Osmotic Compensation of the Pressure of Wealth during the Contemplation of Poverty, 2005

The work of Alice Creischer (Berlin, 1960) is intensely narrative. It is structured around a search to find instruments to visualise the forms, moments and situations in which the history of capitalism and its operating principles become stories of exploitation, exclusion and distortion of the basic principles of democracy. Creischer's interest in exploring the relationships between official policy (as represented by the actions of governments), business (the huge finance and banking corporations) and culture (in which certain figures and new types of alienation and manipulation have their origin) is reflected through installations, drawings and collages, as well as articles and texts. Her ethical position rails against the predicament of contemporary liberal governments and the supposed misfortune of financial, political and social crises. In a way, her work bears a relationship to the critical tradition of the Berlin Dadaists who depicted with such burning irony the Weimar Republic's political decadence following the First World War, while it also forms links with literary traditions established in German Romanticism.

The exhibition at MACBA highlights the three main types of works that the artist has produced, which are structured around the notions of satire, fable and scientific research. The exhibition includes works of a great significance in her recent production. Apparatus for the Osmotic Compensation of the Pressure of Wealth During the Contemplation of Poverty (2005), is an installation featuring sculptural elements which sets out to reconstruct the artist’s own experience on a journey to India in 2004, where she was faced with situations of the most extreme poverty. In relation to this work, the artist wrote to the Buenos Aires-based group Colectivo Situaciones, "We read your letter having returned from a trip to India. It took us a long time before we were able to describe the black hole into which we had fallen. Towards the end of our stay (…), the driver dropped us at the station and left. We waited for the train without the usual hubbub of services and, in an instant, we were surrounded by beggars: women, men and children who were crippled, sick and hungry. We were kind of anaesthetised. We could neither give them money nor send them away. We imagined that all the actors in that scene took it for granted they would receive a "yes/no", "money/no money" for an answer. Actually, we possess this capability as a result of having learnt to avoid seeing the beggars, to ignore them, to think of them as air or, with a bit of luck, little flying insects. But who can tell between being anaesthetised and ignorant?" Apparatus… resembles an enlarged camera mechanism. The perspective taken shows us how this mechanism includes an accumulation of data that speaks of the taxation systems imposed by the British in India, the distribution of property and the role of photography in representing the indigenous population. It also reveals the factors that led to the first independent constitution of India as a sovereign state. Simultaneously, we discover information about the trade in silver from the Potosi mines in what is, today, Bolivia. Colonisation, says Creischer, is a primal state of globalisation:the first huge movements of the planet's capital begin with 16th-century colonialist enterprises and continue today under different names and presentations. The 2001 crisis in Argentina may also be seen as a consequence of worldwide capital flows. Brukman’s Suits (2003) is a testament to the artist's involvement in this context. Creischer created the piece with the cooperation of workers from the Brukmann factory in Buenos Aires who had decided to continue the business' activity on their own after the company had closed down.

The exhibition will provide a new, enlarged presentation of L’Atelier de la peintrice. Allégorie réelle déterminant une phase de sept années de ma vie artistique dans la République de Berlin (The Woman Painter's Atelier. Real Allegory which Determines a Seven-year Period of My Artistic Life in the Berlin Republic), produced in 2000. This work is a reinterpretation of a painting by Gustave Courbet in which the artist portrays himself as the central figure amid several leading representatives of French culture and politics in 1855.In a similar fashion, Creischer's reworking portrays the figures and individuals that came together in the Berlin of the 1990s,among whom may be found the artist herself and her friends. A fanzine-type publication accompanies the work and provides keys to its reading. The painting was made on a sheet of transparent plastic, with a projector creating a background of shadows and rays of light. It is thus a mechanism of dynamic, theatrical presentation which stimulates a perception and reading of the piece usually reserved for sculpture. L’Atelier... has close ties to Proudhon, the 10 December Society and the Idle Debtor’s Club. A Concetto in Three Acts (2007),which presents a sound piece in three acts in the form of a concetto performed in a kind of puppet theatre, a method of assembling texts which was often practised in the time of Manierism and which represents the types of personality that mark the political and economic world. The work reproduces texts by Marx on the revolution of the 18 Brumaire of Year VIII (9 November 1799) and the analysis of politics' dependence on the economy.

The exhibition is completed with a selection of videos by Alice Creischer made in conjunction with other artists, among them Andreas Siekmann. Worthy of special note here is the artist's latest work produced for Documenta 12, a work entitled
All of a Sudden and Simultaneously. A Feasibility Study. Musical Scenes on the Negation of Labour (2007). The video documents a musical performance given inside a large shopping centre in the city of Kassel and was made in collaboration with the musician Alexander von Borries. While recreating an atmosphere drawn from science fiction,the work talks of a world in which purchasing is no longer necessary. The presenter opens the show with, "Good morning ladies and gentlemen; what you will see in the next few hours belongs to the field of science fiction. We will take you to a world where all relationships between work, merchandise and money dissolve to the point that they disappear. If, for instance, you take a step to one side you may immediately –oops – fall into an intergalactic tunnel. This tunnel is a short-cut between reality and reality. It is full of negative energy. Once out of the tunnel there is no other world. But you may, suddenly, not want to buy anything ever again." The anguish of the world of shopping and critique of the consumer society are also expressed in videos such as Die Verallgemeinerung von Nichtarbeit (The Generalisation of not Working) (2000) and ...um sie erneut zu erwerben (... to Earn it Again) (1996), two works that satirise shopping centres and use them as settings for performance interventions based on an amalgam of extracts of texts taken from Marx and Nietzsche. Equally ironic and bitterly humorous are the videos like Easy Rider, the recreation of a scene from Dennis Hopper's iconic 1969 film, and Die Krumme Pranke (The Curved Claw) (2000), a kind of cartoon animation about the reconstruction of downtown Berlin after the fall of the Wall which, through the animation of clay characters, presents a caricature of the relationship between public management and property speculation.

Image: Apparatus For The Osmotic Compensation Of The Pressure Of Wealth During The Contemplation Of Poverty, 2005

This exhibition has been carried out within the framework of Transform http://transform.eipcp.net
and with the support of the European Community.

Related publications:
Alice Creischer. Apparatus for the Osmotic Compensation of the Pressure of Wealth during the Contemplation of Poverty