100 years matter. This exhibition presents ten artistic positions that are exploring the transition of our social environment, and our perception of it. Looking for circumstances, they create potentials within the art world that should reach the real world one day. This is the first exhibition of the cycle Chaos and Order. 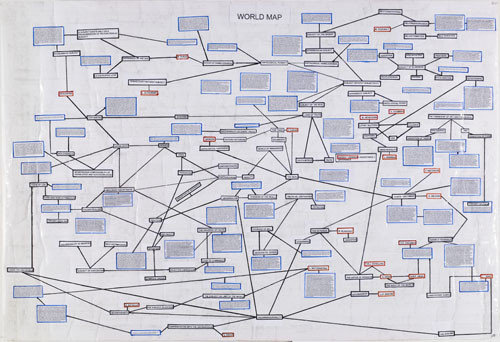 "The philosophers have only interpreted the World in various ways - the point however is to change it." Karl Marx

1908 Lenin describes matter as an objective reality, existing independently of human consciousness and reflected by our senses. Following this theory we can suppose that the world around us is only our personal subjective perception of reality, as we can change the world through changing our perception of it and sharing the new perspectives with our environment.

When the term New World originates in the 15th century it refers to the Americas. Depending on the sphere of discourse it can describe Australasia too, as Europe was the center of an empire, and the New World was its colony. Today Hardt and Negri depict a new empire without a territorial center of power. From Europe to the US, and now towards Asia, the center is blending in transition, for a new discourse to come.

This exhibition presents ten artistic positions that are exploring the transition of our social environment, and our perception of it. Looking for circumstances, they create potentials within the art world that should reach the real world one day.

"The New World" is the first exhibition of the cycle "Chaos and Order".


Nicolai Angelov
The sculpture "Transit" of the Bulgarian artist Nicolai Angelov is a minimalist reference to a black market phenomenon. The 4 meter structure of wood-beams is ready for transportation to the construction industry. It is a monument of destroyed nature, and our multi-profit of it. Looking at the beams we find a hole creating a space for a man to enter and hide inside, a common way for transition of people from the third world to a better life.

Michel de Broin
The Canadian artist Michel de Broin offers with his "Shared Propulsion Car" an alternative to driving in post-oil times. Through removing the engine and electrical systems from a 86’ Buick Regal and installing instead a cutting-edge transmission technology of 4 independent pedals and gears, de Broin retains the experience of driving a luxury car, and redefines the ecological standards of automobile industry. The video of the performance follows the car through the streets of Toronto where the artist was issued a traffic ticket for a crime against pollution. The case goes to court on the 4th of April 2008.

Vasco da Gamma
The power of mass media, news and films is shaping our worldview and often abusing our perception through serving unconscious ideology. The fiction of reality impacts the intense trailer "Infinite Justice" of the Yugoslavian artist Vasco da Gamma, who cuts a breath-taking film from the TV coverage on the 11th, 12th and 13th of September 2001. During and after the tragedy many viewers were unable to perceive, if what they see is real, and were often as thrilled as looking at the Hollywood production that was running between the breaking news.

Leopold Kessler
Traffic signs with bullet holes are depicting the disorder of order. Evoking exciting interpretations or anxious feelings, they are always a reason to question the organisation of social space. Leopold Kessler’s video "Perforation Kal. 10 mm" shows a construction worker (the artist) walking along the streets of Vienna and perforating signs with a huge hole-puncher. Kessler’s silent interventions are often helping us revise our environment, and suspect art behind every irregularity.

Timo Nasseri
The photograph "Mimikry" shows a large group of Muslims on a hill below a mountain peak. Looking very much like a suspicious plenum, the viewer is involved in a process of fictional interpretations of the event, which actually depicts a peaceful polo game between two villages in Pakistan.
Nasseri’s second work in the show, the wall-sculpture "Simorgh" (Phoenix) is inspired by the aesthetics of Persian calligraphy and cross-rooting between the east-west mythologies, exploring the prejudice of our socio-political perception. It is also the name of an Iranian military aircraft, unlicensed version of the American F-5 Freedom Fighter. Both works are researches into his personal cultural heritage as a son of German-Iranian parents.

Ariel Orozco
Born in Cuba and living in Mexico now, Ariel Orozco grew up with the ideals of the post-revolution and the power of the individual in shaping a better society. Proving his character, strong body and mind, the artist trained for two months to become his own flag for one second. "Contrapeso" is a very personal action as socio-political reference to the misbalance between efforts and result. Ariel Orozco will have a site-specific exhibition at Artnews Projects later this year.

Baldvin Ringsted
The Icelandic artist and musician Baldvin Ringsted exploits familiar ‘found sounds’ to create new audio-visual environments. Through his studies in jazz theory he develops a complex system transposing language to a musical score. In the exhibition Ringsted presents the manuscript of his handwritten score for solo cello, based on the historical speech of Martin Luther King "I have a dream". The piece is a homage to a dream coming true, and will be performed live at the opening by the artist Jorinde Voigt.

Marcus Steinweg
The "World Map" of the philosopher Marcus Steinweg defines the World through a complex mind map of texts, references and citations. The visually chaotic system is marked by a logical structure of philosophical influences and ideas, shaping the world in theory and praxis, and affirming philosophy as art. Looking for a new approach, Steinweg goes beyond academic work, lectures and publications, to inspire with his position many artists and exhibitions.

Vlado Velkov
In recent years possible nuclear production became the official reason for preventive wars and tension, leading military activities to the peaks of the cold war. Following a detailed scientific manual from the internet Velkov creates step by step his own H-Bomb and presents the result, from uranium ores to fine mechanics, exploring the borders between art and science, politics and crime. The installation consists of the founded manuscript, production process, and the cloud of the mushroom.

Anton Vidokle
"Nuevo" is one of the large-scale public projects of Anton Vidokle, who organised and filmed the transformation of the Salto del Agua metro station in downtown Mexico City. The anonymous grey facade of the building is turning module-by-module to bright red in an abstract geometrical painting process, changing the aura of the whole area. Vidokle’s interdisciplinary projects are often monumental, involving many people and ideas, looking for the change around us, in each one of us.