"The way of life" brings together works from international artists who are concerned with the spirits of life and extinction like Gregory and Cyril Chapuisat, Sean Landers, Kelly Nipper, Roman Signer, ecc. Curated by Gianni Jetzer. "Black and Blue" is the solo show of Ryan Foerster. The exhibition offers a sobering body of work, photographs and sculptures that connect the line betweenprivacy and exposure. Curated by Piper Marshall. 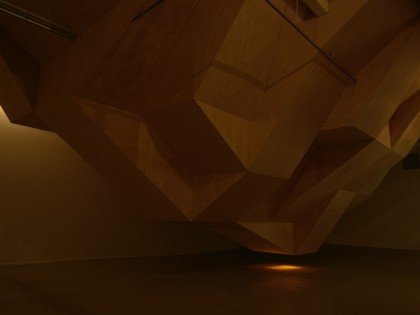 The Why of Life

Despite today’s enormous amount of information, the reason for our existence remains enigmatic. The amount of dark secrets is bone crushing compared to what we know as sure as fate. The group-show “The Why of Life” brings together works from international artists concerned with spirits of life and their extinction.

The exhibition recalls the leitmotif of Materialism and Causality, and how these principles relate to one another. The "billiard ball" hypothesis, a product of Newtonian physics, argues that once the initial conditions of the universe have been established the rest of history follows inevitably.

Positioning itself intentionally as melancholic towards life, the exhibition offers a sheer deterministic attitude. “The Why of Life” contrasts the assurance that self-will and performance yield success. Most artworks in the show reflect universal questions in a micro-scale. They circle around the bigness of small things and stress the nothingness of human existence.

The large-scale installation “Metamorphosis of impact” by Cyril and Gregory Chapuisat is a deprivation chamber in the form of an upside-down mountain. The viewer isolated in its middle, experiences isolation and exclusiveness.

The “Suicide Plant” by Carsten Höller gets punished for its will to grow. As soon as it reaches a certain height, it electrocutes itself. This surreal test case elevates the plant to an organism with its own will.

“Circle, Circle” an installation by Kelly Nipper, is a small booth from which an ice-cube mobile hangs. A square drum is placed under the mobile to magnify the melting of each ice cube medallion. The dissolution of matter, solid to liquid, resonates throughout the gallery.
In his paintings, Sean Landers echoes the polar opposites of tormented self-doubt and endless self-aggrandizement.

“Candle” by Roman Signer is a simple apparatus consisting of a board, an air pump, and a candle. The artist offers the viewer an impertinent decision: to blow out the flame by stepping on the pump. The consequences seem as simple as incalculable.
In her installation “100 Photographs That Changed The World,” Lisa Oppenheim uses source images, such as the assassination of JFK in Dallas, found in the famous book compiled by the editors of LIFE magazine. The artist enters time, place, and date of each photograph into a computer program that generates the exact star constellation of these moments. The resulting star fields transcend into universal patterns for human tragedies.

Rancid was my favorite band when I was sixteen, and they influenced me lots, so its kind of like paying tribute to them by stealing the titles from their best songs
-- Ryan Foerster

Black & Blue, the first New York solo show by Ryan Foerster, offers a sobering body of work, photographs and sculptures that connect the line between privacy and exposure. Departing from biographical experiences, his works unabashedly capture the raw trials of youth. Foerster pairs two enlarged objects abstracted from his past and present: a homemade patch and a broken painting of a check. In addition, the artist presents many photographs published in the latest installment of his free zine 'Foerster.'

Foerster was born in 1983, New Market Canada. He lives and works between New York and New Market. Exhibitions include White Columns, the Kitchen, and 127 in New York.