Actress Slash Model. Taking as a starting point the banal, semi-nude female models that appear daily in British tabloid newspapers, the artist reconstructs their playful poses in large-scale collages and works on paper. 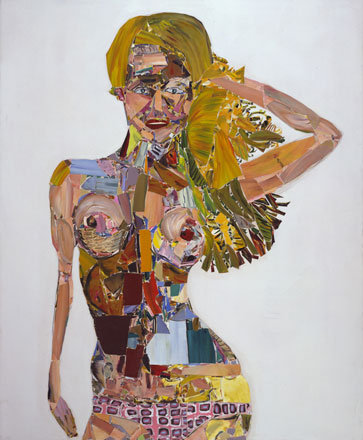 Timothy Taylor Gallery is delighted to present a series of new works by Martin Maloney. Taking as a starting point the banal, semi-nude female models that appear daily in British tabloid newspapers, Maloney reconstructs their playful poses in large-scale collages and works on paper to be shown in both the Carlos Place and Dering Street galleries. Bold, amusing and varied, these collages are a continuation of a body of work that mixes high-art reference with pop-cultural influences. Maloney uses an intuitive and seemingly Expressionist style to examine the classic art historical genre of the female nude. The buxom bodies of young, fleshy ingénues are collaged in blocks of colour taken from previously painted and discarded canvases. Figurative and strikingly graphic, these works are infiltrated with the complexity of abstraction. Recycling and reforming his own work, Maloney takes something old to make something new.

Maloney works in a free way without preliminary studies or any idea of the look of the final piece. Complimentary and contradictory colour, texture and pattern are juxtaposed on the canvas creating a complex and varied surface. Flat expanses of paint and wild, intricate patterns lie against daring leaps of colour and vigorous brushwork and are held together on the raw canvas background with the trace of a charcoal outline. Although absorbed by art history, the works are immediately accessible and allow the viewer to create their own narrative; Ruby Green is a flame-haired, strong woman who stares directly at the viewer with piercing blue eyes; Kali leans suggestively away and smiles; Kitten strikes an archetypal glamour pose, while Lolita, with her raven pigtails, is at once burlesque icon and school girl.