An exhibition of large-scale oil paintings dealing with pictorial construction and the manipulated environments of contemporary America. In these works the artist explores sites that are ruined or in the process of being rebuilt. 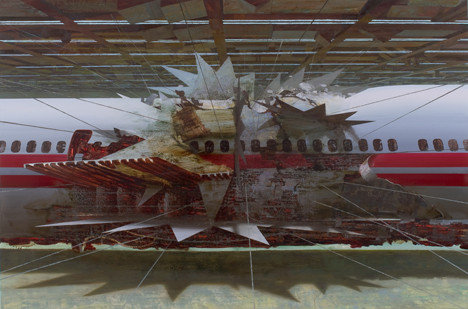 Cherry and Martin presents its first solo exhibition of Daniel Dove’s large-scale oil paintings dealing with pictorial construction and the manipulated environments of contemporary America. The exhibition opens at Cherry and Martin on April 19, 2008 and runs through May 24, 2008.

Over the course of the past four years, Daniel Dove has made paintings in which chance-driven surface process—drips and scrapes, smears and aggressive brushwork—vie with traditional illusionistic space. These two systems of painting are forced to co-exist in Dove’s work, the former emphasizing the protean nature of painterly craft, the latter examining the structure of representation. Dove’s insistence on looking at how paintings are constructed enables an investigation of the history of the art and its movements, while at the same time providing Dove with his own language for making pictures.

Daniel Dove’s paintings also examine the peculiarities of place and the idiosyncrasies of the modern American landscape, particularly in relation to Modernism. In his exhibition at Cherry and Martin, Dove explores sites that are ruined or in the process of being rebuilt. “Autopsy,” a large painting depicting the forensic reconstruction of a crashed plane, describes the aircraft’s body by way of scraped marks that serve as much to allude to the surface of the canvas as to further the presentation of the image. Complicating the work is a series of truncated star shapes that simultaneously define the perspective of the picture and offer a physical interpretation of a violent event.

Daniel Dove received his MFA from Yale University. His work has been featured in the exhibitions, Made in California at the Frederick R. Wesiman Museum of Art (Malibu, CA); More Is More: Maximalist Tendencies in Recent American Painting, at Florida State University (Tallahassee, FL); I Love the Burbs at the Katonah Museum of Art (Katonah, NY); Dreaming of a More Better Future, curated by Saul Ostrow, at the Cleveland Art Institute (Cleveland, OH); and In Door Out, at ACME gallery (Los Angeles, CA).