An exhibition of collaborative works by Marco Breuer and Arnold Helbling: a dialogue held over the past six months. The artists mailed over one hundred works-in-progress back and forth to be altered, erased, and reworked by the other. 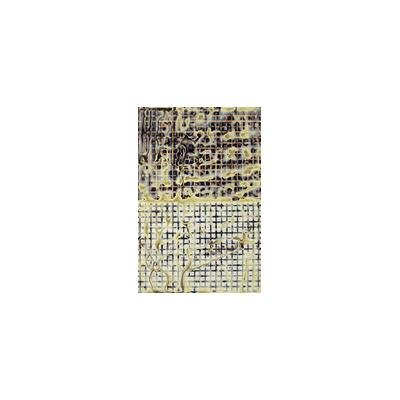 Von Lintel Gallery is pleased to present This is Karate, an exhibition of collaborative works by Marco Breuer and Arnold Helbling.

As an outgrowth of a decade-long exchange between the two artists, this exhibition features an intensive visual conversation that took place between Breuer and Helbling over the past six months. The artists mailed over one hundred works-in-progress back and forth to be altered, erased, and reworked by the other. Breuer, who approached the work from his photographic background, and Helbling, a painter who is most known for his large-scale canvases, challenged one another to incorporate variables introduced by the other.

“The process was not all love and harmony,” says Breuer. The exhibition title, taken from a found book, is aptly applied. The rules and parameters of the collaboration made it nothing short of a full contact sport. The resulting artworks, stunning multilayered visual fugues, chart the multiple moves as the pieces migrated between the artists and ultimately reveal the confluence of each artist’s strengths and strategies.

Marco Breuer has exhibited widely throughout the United States and Europe. His work is in numerous collections, including The Museum of Modern Art in New York; the Fogg Art Museum at Harvard University; and the Staatsgalerie in Stuttgart, Germany. He received a Guggenheim fellowship in 2006. In 2007 Aperture published a monograph of his work titled Early Recordings. He recently curated the group show Drawing, Thinking at Von Lintel Gallery.

Arnold Helbling has exhibited internationally throughout the last decade. His work is in numerous European and American collections, including the Schweizerische Eidgenossenschaft, Bern; Aargauisches Kunsthaus, Aarau, Switzerland; Centre Pasqu’Art, Biel, Switzerland; and the Neuberger Museum, Purchase, NY. His work has been reviewed in Art in America, Das Kunstbulletin, The New York Times, Neue Zürcher Zeitung, and The Korea Times, among others.