An ambitious project involving different centres. The Cuyas Theatre, the Island Library, the Christopher Columbus House Museum, the Gran Canaria Espacio Digital Centre of Plastic Arts and CAAM have coordinated activities which bring together theatre, film and visual arts focusing on a programme studying the contemporary perspective of death, all rounded off with a debate and a seminar. Focusing on the Hispanic and Latin American World, the exhibition tries to reveal a different approach to death in the mirror of art; works by 28 artists. 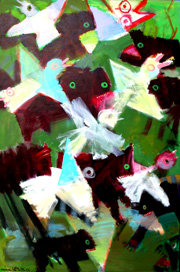 ‘Cuatricomía de la muerte’ / ‘Death in four colours’ appears on 18th April as an ambitious project involving different centres which depend on the Regional Department of Culture, as part of a new shared programming strategy which aims to approach the same theme from the perspective in which each centre specialises. The Cuyás Theatre, the Island Library, the Christopher Columbus House Museum, the Gran Canaria Espacio Digital Centre of Plastic Arts and CAAM have coordinated activities which bring together theatre, film and visual arts focusing on a programme studying the contemporary perspective of death, all rounded off with a debate and a seminar.

Exhibition curated by Gerald Matt, Thomas Mießgang and Álvaro Rodríguez Fominaya in cooperation with the Kunsthalle Wien. Focusing on the Hispanic and Latin American World, the exhibition tries to reveal a different approach to death in the mirror of art. Spain, as a European country that caught up with industrial modernity at a quite late point in time, has a centuries-long tradition of death ceremonies and dying cults that spans from the Hidalgos’ warrior ideology and the Baroque idea of vanity to the flagellantism of the Semana Santa or Holy Week.


The Danish painter Arne Haugen Sorensen is one of the participants in this project ‘Cuatricomía de la Muerte’/‘Death in Four Colours’. His plastic work reflects on life and death and approaches the enigma of transit from a perspective which is broader than that of Scandinavian existentialist thinking, as it also contemplates classic mythology and the Christianity which is so widespread in Latin American countries.

A Danish painter of major themes concerning mankind, in each painting he reinterprets his unease about life and uses myths and sacred stories to tell the story of the drama he sees every day in his garden: the clever animal who devours the slower one, the fearful flapping of the wings of the bird caught between a cat’s teeth, with the only aim of convincing himself – and us – that life is just a chain in which death does not darken the colour of life.

The exhibition by Arne Haugen Sorensen, together with the exhibition curated by Federico Castro, shows the constant presence of death in his work during the last few years, ‘Battle between Centaurs and Amazons’, ‘Birds and beasts’, ‘Portacruz’, ‘Crucifixion’, ‘Saint George and the Dragon’, ‘Isaac and Abraham’, ‘Tauromachia’ (Bullfighting)... are some of the themes on display in this exhibition, with paintings, engravings, designs for altars and stained glass windows.

Jose Dámaso’s proposal for the ‘La Sonrisa de la Muerte’/‘The Smile of Death’ exhibition –produced by CAAM, curated by the artist and writer himself, Vicente Molina Foix, and coordinated by Carmensa de la Hoz– is part of the ‘Cuatricomía de la muerte’/‘Death in four colours’ project. Pepe Dámaso is reminiscent of how an afternoon game was interrupted by a call anticipating loss from inside the house. The cold vacuum of death shone clearly in the mirror that the doctor was holding before his father’s face. The total absence of fogging confirmed that he had died. This childhood experience, which has been a constant throughout this vital artist’s life, has led him to continually approach the subject of death.

On this occasion, the scenario, the San Antonio Abad Exhibition Room, is approached by José Dámaso as part of an exhibition project which takes over the place to lead us to some milestones related to the subject, of crucial importance for Dámaso: from the splendid ‘Death laid eggs in the wound’ series, designed as a tribute to Federico García Lorca, to more recent creations, displayed in a room full of mirrors in which the spectators themselves are reflected.

The exhibition, curated by Celestino Hernández, is a set of twenty-four oil paintings on canvas, all related to the subject of Skulls and Vanitas, created by Cristino over more than twenty years, from 1972 - Dead woman - to 2004 - Window, skull and lightning and Window, skull and Teide.

Through this selection of works, most of which belong to the Cristino de Vera Foundation, managed by CajaCanarias, to the artist’s legacy to the Government of the Canary Islands and to some private collections, we can approach a subject from which Cristino never strayed. In order to follow the evolution of his work, in which death was the recurring theme, the twenty- four oils have been arranged in three groups from different periods and with a different treatment of the elements forming part of the compositions.

‘The Lion in Winter’ is James Goldman’s best known work. Its popularity is due both to its Broadway premiere in 1967 and its subsequent film adaptation in 1968, obtaining important theatre and film awards in 1968 and 1969. It contemplates solitude and death in the context of the battle between brothers to succeed Henry II and Eleanor of Aquitaine on the throne. Version and Direction: Juan C. Pérez de la Fuente, with Manuel Tejada and Alicia Sánchez.

The ‘Four Views of Death’ discussion intends to delve further into this fruitful magma of concepts related to death and its pathological processes.
Through four prestigious interdisciplinary voices, from the Palliative Medicine, the Psychoanalysis, the Bioanthropolgy and the Philosophy of Law, it aspires to help to clarify questions concerning this complex situation.

From 5.00 pm to 9.00 pm
The Professional and Human Approach in the Process of Dying. Marcos Gómez Sancho. Director of the Palliative Medicine Unit at the Doctor Negrín University Hospital.

Death From A Bioanthropological Perspective
Conrado Rodríguez Martín. Director of the Institute of Bioanthropology of the Canary Islands. (Autonomous Body of Museums and Centres –Island Government of Tenerife).

Contemporary Death Between Leaving And The Voice
Victor Méndez Baiges. Philosophy of Law Lecturer at the University of Barcelona, author of the book entitled ‘About Dying’ (publishing house: Trota, 2002).

Appearances and disappearances. Seminar directed by Nilo Palenzuela.
21st, 22nd and 23rd May.

Major issues are always in view, although we sometimes ignore them due to either decorum or prudence. Art, literature and philosophy, like any other aesthetic expression, cannot exist without it constantly appearing. The tragic feeling of life and death constantly compromise creative language due to its violent daily appearance or the metaphysical concerns it generates. This seminar approaches the subject of disappearance and death in 20th century expressions, focusing on authors of different origins.

21st May
5.00 pm
Nilo Palenzuela: Presentation
5.15 pm
Ana Nuño: The human condition according to Hannah Arendt: manifestly, as in a mirror.
7.00 pm
Alberto Ruy Sánchez:
Colours and flavours of death in Mexico.

DEATH ON THE SCREEN Series

The taboo surrounding pain, illness and death was one of the last to fall in the history of film. Classic cinema developed a fine system of allusions to evoke death without it being displayed (as it did with the other organic taboo: sex). Modern film developed an ethic for its representation: death could not be ignored but had to be correctly depicted. In more recent times, as film is becoming more subsidiary to television, a new model has arisen in which pain and death are highlighted aspects of entertainment.

The CAAM’s Department of Education and Cultural Action (DEAC, by its spanish acronym) establishes a collaboration project with the Art School of Las Palmas de Gran Canaria, in order to participate in the Centre’s dynamic as a space open to the island’s different cultural strata.
The future artists will be using part of the museum’s facilities to exhibit their work, so the Centre becomes a laboratory of ideas. Two creative factors are put into practice based on a common concept (death): the official exhibit and another parallel exhibition generated by the School’s students.