Beginning with an extraordinary family house in Cornwall, then changing the shape of post-War architecture with the Pompidou Centre, Rogers now heads up an international office that is busier than ever. Recipient of the most prestigious distinction in international architecture, the 2007 Pritzker Prize, he is one of Britain's most influential architects. 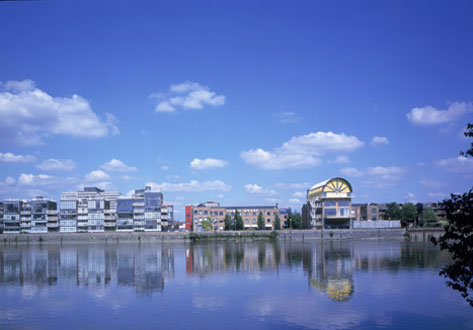 One of the most influential British architects of our time, RICHARD ROGERS (1933-) has established himself and his practice, Rogers Stirk Harbour + Partners, at the forefront of today’s architecture industry through such high-profile projects as the Pompidou Centre, the headquarters for Lloyds of London, the Millennium Dome, and Madrid Barajas Airport.

Three decades, and two comprehensive makeovers after it was finished, the Pompidou Centre has survived its moment at the edge of architectural fashion, and proved itself to be one of the most remarkable buildings of the 20th century. The shock value of its colour-coded plumbing and its exhibitionist structure has not faded with the years. But while it was regarded as an ugly onslaught on Paris by the traditionalists when it was built, it is now seen for what it is – an enormous achievement, technically and conceptually.

A more subtle criticism at the time was voiced by Alan Colquhoun, once Richard Rogers’ tutor, who described it as fatally lacking a ‘face’. And it is true that Rogers and his co-designer Renzo Piano did not use architecture to represent the Pompidou Centre’s cultural role. But when the Pompidou was young, its cheerful technological optimism, and its good-hearted embrace of its urban context proved enormously popular with the public. It served almost single-handedly to inject the idea of radical modernism back onto the agenda, after what can only be described as a crisis of confidence in the architectural profession triggered by the evaporation of the dream of a modernist utopia with the demolition of scores of troublesome teenage tower blocks.

The image of the Pompidou pervaded popular culture in the 1970s, making appearances on album covers and as a table lamp – and even acting as the set for a Bond film. It did much to overcome the hermetic nature of the architectural culture of its time, moving outside the professional ghetto to appeal to a wider audience both stylistically and in its content. Less appealingly, it triggered an explosion of high-tech styling, characterised by derivative perforated metal and exposed structural bracing. It was, in short, a sensation, in much the same way that Frank Gehry’s Guggenheim museum in Bilbao was to become at the end of the 1990s.

Rogers was only 38 when he and Piano won the competition to design a new cultural centre for Paris in the old market district. Afterwards he claimed that he had to be talked into it, because he believed that there was little chance that the French government would be interested in building anything radical. Philip Johnson and Jean Prouvé were the two jury members who argued most persuasively for Piano + Rogers’ anonymously submitted design that seemed to derive in equal parts from the Futurists, and from Archigram.

It was certainly like no previous museum with its plans for an infinitely flexible interior that not only had movable walls, but floors that could also be adjusted up or down – a feature that did not in the end survive the process of turning the competition drawings into a real building. In other ways, however, the finished building demonstrated a remarkable degree of refinement – of craftsmanship even – in the way the original diagram was transformed into superbly detailed structural elements. It was this quality which, according to some critics, suggested that the Pompidou should be seen as closer to the Victorian engineering tradition than the space age. Certainly, it reflected some of the lessons that Rogers had learned from his childhood Meccano set.

The Pompidou catapulted Rogers from the obscurity of a small practice on to a world stage. But he showed a marked reluctance to use the opportunity to transform his practice into a large scale architectural organisation in the way that his former partner Norman Foster was to do. He spent nearly five years in Paris building the Pompidou – or the Beaubourg as it was called at first by those, like Rogers, who were reluctant to see the structure associated so closely with its namesake, the right-wing politician who was seen as responsible for stamping out the insurrectionary outburst of May 1968. Then Rogers went back to London, and found that the work had run out.

Salvation came in the unlikely form of the insurance brokers, Lloyd’s of London. Rogers, practising without Piano, won another competition, to replace the existing headquarters of Lloyd’s with a new structure that took the technological expressionism of the Pompidou Centre to its extreme. Lloyds of London has a concrete structure, unlike the Pompidou Centre which is built in steel. Despite the apparent similarities with its predecessor, it is inspired as much by a determination to work with the visual grain of the city, rather than to be read as an alien intrusion. The staircases, lift towers and lavatories have been extracted from the interior, and placed in expressed towers and shafts on the exterior. They reflect the US architect Louis Kahn’s idea of buildings divided into ‘served and servant’ spaces. The notional justification is practical: it leaves floors open and uncluttered. Equally important is the picturesque effect that this arrangement makes possible.

Indeed it is hard to imagine a more traditional project, despite Rogers’ association with modernity. Lloyd’s of London is a tailor-made building designed as the city centre headquarters of an owner-occupier. It is the architectural equivalent of a Savile Row suit, with an eccentric cut, perhaps, but still essentially part of architectural high culture, while its truly ‘modern’ counterpart would be a speculative office slab on the edge of town.

With the completion of Lloyd’s of London, Rogers became involved with the exploration of urban issues. He began to work on master planning as well as individual buildings. And he pursued his left-wing instincts, to play an active role in politics. He became a Labour peer. In the wake of Tony Blair’s victory in the 1997 general election, Rogers was – in political terms – the best-connected British architect in two generations. Rogers set out to use his skills to shape government policy on the shape of the city. He guided the government‘s Urban Task Force, which set out an agenda for rescuing the cities from decay, advocating densification to revitalise them, and using brown field sites, rather than sacrificing yet more green land to suburban sprawl.

Rogers found his political experiences frustrating, and became openly critical of some government policies, but persevered, and moved on to play a key role as the Mayor of London’s architectural advisor. At the same time he was working on larger and larger projects, including Terminal 5 at Heathrow Airport, the Antwerp Law Courts, a new terminal for Madrid Barajas Airport and a tower for the site of the World Trade Center in New York.

Richard Rogers was born in Florence in 1933 of Anglo-Italian parents. His cousin was Ernesto Rogers, the celebrated Italian architect. Rogers graduated from the Architectural Association in 1959, the year after Peter Cook and the other members of what was to become Archigram arrived. In 1961, while completing his education by taking a postgraduate planning course at Yale under the direction of Serge Chermayeff, where James Stirling was a visiting critic, he met a fellow British student Norman Foster.

It was on the face of it an unlikely friendship. Foster was born in Manchester, into a family in which, as he puts it, going to university, or becoming an architect never seemed a possibility. In 1963 they set up a practice called Team 4, which lasted until 1967. It was composed of Rogers and his first wife Su Brumwell, Foster and his first wife, Wendy.

It was the start of a decade which was to see an unprecedented questioning of the traditional norms of English society. Hedonism and the construction of a new social order were the priorities. Rogers immersed himself to the full in this ferment, and even today, as a member of the House of Lords, the ideas which inform the management of his practice owe a great deal to it.

Yet Team 4’s first project was a highly traditional commission for young architects embarking on a career: a house for relatives. They were asked to design a home for Su Rogers’ parents, Marcus and Irene Brumwell in Cornwall. The Brumwells sold a Mondrian painting they had bought from the artist in the 1930s, to pay for it. The house is a tour de force, half buried into the contours of its magnificent coastal site. There are few signs of the preoccupation of both Rogers and Foster with lightweight prefabricated buildings. Indeed the slate floors and exposed concrete block work have a certain monumentality.

The project that really enforced the two architects’ claim to attention was the Reliance Controls building in Swindon. Completed in 1967, just before the partnership was dissolved, it combined the taught elegant exposed steel of Charles Eames with an interest in social issues unusual for the time, abolishing the distinctions between management and workforce by creating shared entrances and canteens.

In 1971, Rogers went into partnership with Renzo Piano, an architect from Genoa who shared his taste for the radical applications of technology and, as they saw it, it's liberating potential. “Technology cannot be an end in itself, but must aim at solving long-term social and ecological problems” wrote Rogers at the time. “This is impossible in a world where short-term profit for the ‘haves’ is seen as a goal at the expense of developing more efficient technology for the ‘have nots’”.

Thirty years later, he found himself struggling to persuade the mayor of Shanghai not to stamp out the bicycle, only to conclude that only China could make such decisions for itself. In the end, Rogers’ greatest contribution to architecture has not been in creating a technological image, as the Pompidou seemed to suggest, but in emphasising the social and urban dimension of architecture, as well as in their sometimes brilliant synthesis with detail and structure to create architecture with a powerfully inventive character.