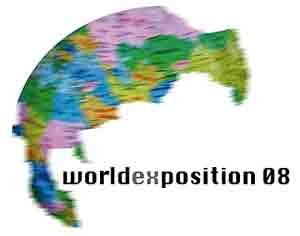 ALEXANDER NIKOLIC | STATEMENT
The proposed WORLD- EXPO in 1991 for Vienna did not succeed due to a poll result asking the citizens of the city for consent. We don't ask. Not at all. We even wouldn't, not that we would know whom to ask. Yet, did you know the eldest pyramids in the world to be built in Bosnia-Herzegovina? If the mummies would suddenly awake and appear, what would they think? In Balkan regions you will hear a running joke frequently: "Here, still nothing has changed" or a variation: "Who turned back the time?"

The buzz of World-Exposition was conceived in 1995 and considered to be conduit breaking. An epoch making first one to be planned, arranged and carried out of two Countries. First World-Exposition in Vienna took place in 1873 - its former office, today is premise of LABfactory.

A parallel to 1995 was that to 1873, the Balkan Peninsula countries freed themselves of Ottoman Empire. They fought for and presented themselves as newly independent states - the planned World Fair 1995 should open a similar perspective. Man in charge agreed to theme their master plan "bridges into the future" - a metaphoric overkill concealing a profitable concept: to subordinate former eastern regions economically through a Utopia of "democratisation" for those who found their self finally at liberty from Real Socialism.

Today, time stands still - still for too many. Opposing this we will cross those bridges to future – marching. "world-ex-position" exhibit will guide us where to go, and how to proceed from here, everyone is free to decide on their behalf.

Johannes Grenzfurthner - monochrom uses different historical and current examples (especially from the area of the hardware/ software-industry). Johannes Grenzfurthner gives a theoretical and applied overview on the musical genre of corporate anthems by taking the issues, such as the advancement of pre-capitalism to post-capitalism (ie. the form of organisation for all social relations in a particular economical ideology), the most dominant type of organisation of the post-capitalist endeavour. Yet this is where contradictions within, and indeed clashes of interest take a step back behind the curtain of the “community”. The return to old ideas of community also brings with it certain forms of rituals, like the usage of a corporate anthem.

Nancy Mauro-Flude | sister0
My First Burial
2006. colour. single channel video. 32 min.
Performing artist and 'queen' of uncensored data, provides her audience with a sensitive view on the uncanny repetition of 'dead girls' in life, art and literature; with the work 'My First Burial'.
State and institutional control of bodies, hardware, software, western medicine plants, herbs, has enduring and limiting effects on those who generate life (women), how we experience life itself, but also our ability to understand the formless world of the dead and undead.
She is concerned with ostracised and imperilled bodies of knowledge and interested in the retrieval and transmission and of them. In the spirt and sentiment of the Beat Generation, in 2003 I went to South Colombia, the Puto-Mayo Region, Foundation de Investigaciones chamanistas to experience ancient practices of plant usage [as software] and how objects, such as the Shaman Rattle rattle and other paraphernalia or talisman [hardware] are related to the rising ubiquity of computational media and platform usage nowadays and the merged realities they bring about with them (for those in the metropoles). Not long after she arrived the shaman's son gave her the Devil Tarot Card, soon after the shaman advised her that she should have a burial. So she began with a burial, “my first burial”.

"...These poets shall exist when the age long slavery shall have ended when, she will be able to live by & for herself, when man hitherto having given her freedom, she will be a poet. Women will discover the unknown. Will her word be different from ours? She will discover things that will be strange & unfathomable, repulsive & delicate. We shall take them from her & we shall understand them. "
-Rimbaud.

Dr. Richard Barbrook traces the early days of the Internet, beginning from a pivotal point at the 1964 World’s Fair, in what critics are saying is the most well-researched and original account of cyber-technology among contemporary works. Crucially, he argues that had the past been different, our technological and political present would not be what it is today.
Stefan Lutschinger is a proletarian bohemian and a departed on holiday. He works in the fields of digital art, recreational robotics, mass agitation art and anthropology of the post-human.
Jaesper Alvar focuses on our living conditions
Société Réaliste proposed to show an extract from its ongoing project Ministère de l'Architecture. The production takes the form of an administration devoted to work on various aspects of the politics of the space. In Vienna, Société Réaliste shows the second chapter of a Ministère de l'Architecture's research project about territorial membranes. This partition specifically concerns the possibility of reshaping European autonomous territories in a more ergonomic way than now.

cuntstunt is a zine, which we like to understand as a feminist "Handapparat", a subjective compilation of texts, drawings and collages, coming from the fields of feminism, anarchism, sexuality, queer theory and music, somewhere in between. Its something like a "best of" of collected material.

XLTerrestrials
THE TRANSMIGRATION OF THE TELEPRESENT
streaming performance
XL Terrestrials present parts of their work to change the course of telematics, human communications and social relationships - hopefully for the better, as they say.
They contribute 3 or 4 things “for the benefit of mankind and universal intelligence” and perhaps set a new precedent whereby rather than humans exhibiting new technologies to explore and conquer space, XL Terrestrials return to earth to present methods for reverse engineering phallic-centric rocket-style science and industry devised by humans to simultaneously transport people elsewhere AND drop weapons which land upon foreign heads. They wish to use this art-portal and opportunity, to look inward and face-to-face and illuminate that, thus far, this route of technology has been a dubious dual enterprise with little humanitarian results.

Zampa di Leone works within the parameters of cultural activism in the Balkan region. Their first fanzine, “In the Arse of the Balkans”, which parodies an entire movement of balkanization of art practices. Their experiment of aesthetic reformulation of the Balkans created its anti-history of sorts.

Ira Hadzic brings euphoric plans for the future in a region of Europe where globalisation is only just starting to take effect into fore. Ira introduces the newly discovered pyramids that fulfil multiple functions: they act as a beacon of hope, a source of inspiration and not least of all as an important economic catalyst.
Stefan Rusu explores how images were used in the construction of the Moldavian identity during soviet era. The construction of myths and legends ends with the appropriation of fairy-tales that overturn the meanings of good and evil and by replacing the real facts with fiction. Then moves to the history and the present of the Moldavia, his home country, and the deep-going cultural connections between it and Mongolia, then we land in Soviet Moldova with a striking story about the creation of an identity as a “brand” which is an artificial.
Rudi Hübl produces fluxus-like sausages made of posters from Austrian culture-personalities: Mozart, Klimt, Schiele, Falco… He works with different techniques and methods, but always posters are subject and material of his urban folxart.
Mario Grubisic creates experiments for the future of utopia derived from the normal and an-normal situation from the past experience.

Kazimir Malevich, confronts us with a question: “[…] I know, this letter is sort of a surprise for most of you, for the general assumption is, I deceased in 1935. Many of you supposed I’m dead and gone. But: is this really true?”

Tanya Ury engages with contemporary trends that still conform to an average uniformity with the idea that a costume doesn't just provide a protective layer but can also be a form of disguise.

Christoph Theiler works in cross disciplinary approach that covers media art and electronic music, leads to tape compositions and multimedia sound installations where everything was in motion

The intention of the Shazalakazoo - Balkan Breakz is simple: it is not meant to be art; it is simple entertainment like the music of its countless predecessors - an important pastime, faithfully accompanying the inhabitants of the Balkan Peninsula throughout its turbulent history, in good or bad times alike. This music only kept changing its outer shell, embracing the ongoing evolution of popular instruments, harmonic and rhythmical influences of any current era. Its essence, however, remained the same: less talking, more dancing, and tomorrow is a new day.