Painting after Painting. Yang Qian became known for his gauzy and dreamlike photorealist paintings of women at their toilette. He seeks to deconstruct the ocular-centrism of art and to liberate the act of observation and appreciation. Curated by Hung Du. 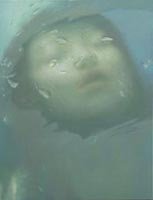 The Red Mansion Foundation is pleased to present its fourth exhibition of works by Yang Qian, curated by Huang Du, editor of Avant Garde Today, at its space in 46 Portland Place. Yang Qian, born in Chengdu (China) in 1959, has shown extensively on an international level, at the Today Art Museum in Beijing, the Shanghai Biennale in 2006, the National Museum of contemporary art in Seoul, and at the Taipei Art Museum, among other places.

Yang Qian continues to play with the notion of multi-layered meaning in painting with his new work. He seeks to deconstruct the ocular-centrism of art and to liberate the act of observation and appreciation. In the “Bathroom” series, images overlap between truth and illusion as we view the subject through the film of a mirror, a sheen of water-droplets, and mist. Following the hidden realities of these reflective and reflected images, Yang Qian’s new work can be categorized as “dual paintings”. His technique involves painting over surfaces of already finished pieces of work, using a colourless fluorescent paint, so that the painting presents a different visual image, depending on whether they are viewed in regular or UV light. This allows for a multiplicity of images, and a new aspect of interaction to emerge.

Yang Qian states that his aim with this series of “dual paintings” was to formally disrupt and go beyond the perceived limitations of a 2 dimensional painting. His new work seeks to engage and interact with the surroundings in a way that totally contradicts the expected restraints of painting. His “dual paintings” are classic in style, but also absorb new media, thus creating a new form of art. Yang Qian’s new work also involves the concept of kinetic paintings- again, these involve and interact with the viewer in a wholly unexpected manner, breaking with the traditional preconceptions of painting. This exhibition as a whole in fact illustrates how the artist seeks to subvert the normal concept, and re-define the connotation and extension of the paintings, through the idiom “Only renovation can rejuvenate painting”.

The Red Mansion Foundation is a not-for-profit organisation, which promotes artistic exchange between China and the UK through a programme of lectures, exhibitions, The Red Mansion Art Prize and “Building Bridges”, an exchange programme for established artists. The Red Mansion Foundation was co-producer and co-sponsor of “China Power Station” (held at Battersea Power Station), “The Real Thing” at Tate Liverpool, the Chinese Pavilion at the 52nd Venice Biennale and the 10th Istanbul Biennale, 2007.