The Tale of Angels

This exhibition aims to set up a framework for discussion, and to encourage and invite Chinese artists to expand their boundaries, and develop new ideas for visual response. Curated by: Jiang Jiehong. 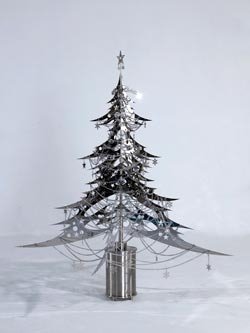 Blades and latex: A Chinese re-imagining of a traditional Christian icon...
Angels are first described in the Bible. Created by God as a separate, higher order of creatures than humans, they possess aspects of intelligence, emotions, and free will. Today, angels are continuously imagined and represented, both in literature and visually, beyond their theological context and biblical origins; at the same time, the image of angels has been utilized for curiosity, communication or faith.

In the history of Western art, there have been numerous images representing angels, usually winged in appearance, implying their nature as God's heralds and flying creatures. In China, these spiritual beings have always been deemed as Western, yet, to many, the contemporary imaginings of angels do not necessarily derive from the original source, (their description in the Bible), but instead depend on the visual interpretations of Western art. This exhibition, The Tale of Angels, aims to set up a framework for discussion, and to encourage and invite Chinese artists to expand their boundaries, and develop new ideas for visual response. It intends to re-examine not only the theoretical notion of an angel, but also, more significantly, the ways in which angels, particularly in the context of Western culture, could be re-imagined. To the artist Shi Jinsong, the beauty of angels has an innocent quality. At an initial glance, his recent stainless steel installation of a Christmas tree has a glorious metallic shine, but it a closer look reveals some fearsome sharpened blades. This work exposes the balance between the beauty of angels and their potentially wrathful nature, and more importantly, the conflict between the amiability of 'imagination' and the injuriousness of 'realisation'. Jiang Zhi has imagined another chilling visualization; that of the flayed flesh of an angel, vulnerable in its nakedness and desolation, like a discarded skin.

Two lectures by the curator will be given during the course of the show, dates and topics tbc. Dr Jiang Jiehong is Senior Lecturer and Director of the Centre for Chinese Visual Arts at Birmingham Institute of Art and Design, Birmingham City University.