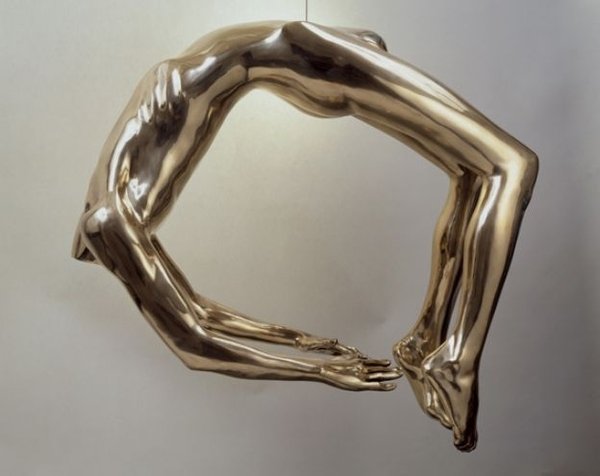 The Smithsonian's Hirshhorn Museum and Sculpture Garden will present a major retrospective of the works of Louise Bourgeois from Feb. 26 through May 17. Bourgeois, a leading figure in 20th century art, was born in Paris in 1911 and has lived in New York since 1938. The exhibition will fill the museum's second-level galleries with over 120 works, primarily sculptural pieces, along with paintings and drawings. The last venue on a five-city world tour, the presentation at the Hirshhorn has been expanded to include five more major sculptures. Among them is the large "Crouching Spider" (2003). The nearly nine-foot-tall bronze-and-steel spider has already been installed outside the museum's entrance, acting as an imposing greeter.

Throughout her 70-year career, Bourgeois has drawn upon personal memories to develop complex meditations on such universal themes as personal identity, family relationships and the power of art to express deeply felt emotions. Her materials range from traditional plaster, bronze, marble and wood to resin, latex, glass, rubber and electric lights, along with found objects such as toy dolls and old furniture and clothes. Bourgeois has an idiosyncratic aesthetic and has adapted and interpreted diverse ideas and styles from Europe and America, notably Surrealism, primitivism, psychoanalysis, conceptualism and feminism.

The exhibition begins with Bourgeois' early drawings and paintings, notably the "Femme Maison" (1945-47) laced with figurative and symbolic content, images that would recur and evolve in sculptures made decades later. The first significant sculptures on view will be the nearly abstract, totemic standing figures known as the "Personages." The series culminates in "Blind Leading the Blind" (1947–49) from the Hirshhorn's collection.

Subsequent galleries present organic compositions suggesting embryonic growth, fertility and the flux of nature, as in "Torso, Self-Portrait" (1963–64) and the exquisitely carved marble "Cloud" (1969). Throughout the exhibition, a number of sculptures are suspended from the ceiling, in one of Bourgeois' preferred means of suggesting "states of ambivalence and doubt." The tiny "Spiral Woman" (1984) suggests a vertiginous state of constant yet pointless motion in a vast empty space. The life-size "Arch of Hysteria" (1993) alludes not only to a state of mind but to gender as well: The term "hysteria" was coined in the 19th century to refer to the emotionality of women, but Bourgeois made this figure male because "men are hysterical too." The eerie "Legs" (1986), also from the Hirshhorn's collection, dangles from the ceiling with the feet hovering just inches from the floor.

Bourgeois' first sculpture of an enclosed environment, "The Destruction of the Father" (1974), is visible only from the front, like a stage in a theater. This work is a precursor to the large structured environments of the 1990s known as the "Cell" series, which the artist has explained "represent different types of pain: the physical, the emotional and psychological, and the mental and intellectual." The "Cell" sculptures originated in the artist's memories of emotional experiences in her own life, yet ultimately they express shared perceptions of the human condition. The circular "Red Room (Parents)" and "Red Room (Child)" (both 1994) suggest memories of childhood, enclosed like time capsules. Surrounded by wooden doors that do not open, these sculptures only partially reveal their contents to viewers who peer in through restricted apertures. In contrast to the inwardly focused "Red Room" duo, the circular "Cell (Twelve Oval Mirrors)" (1998) faces only outwards with nothing in the center, inviting viewers to contemplate themselves.

The title of "Cell (You Better Grow Up)" (1993) echoes a familiar phrase often used by parents to adolescents, yet the meaning of the contents of this metal cage are difficult to decipher. The message in "Cell (Choisy)" (1990–93) is more direct: a model of Bourgeois' childhood home is imprisoned behind a chain-link fence and can be accessed only by passing under a terrifying guillotine. In the disturbing "Spider" (1997) composition, a huge black arachnid straddles a steel cage containing an empty child's chair; the image is mystifying yet immensely powerful.

These sculptures, along with the rest of the exhibition, invite viewers to let their imaginations run wild, to intuit and invent meanings of their own. In today's world of instantaneous information, this is a rare opportunity to revel in an intriguing domain of mystery, ambiguity, symbols and double meanings.

"Louise Bourgeois" was organized by the Hirshhorn in association with Tate Modern, London, and Centre Pompidou, Paris. "Louise Bourgeois" at the Hirshhorn Museum is sponsored by Altria Group, Inc. The exhibition is made possible in part by the Agnes Gund Foundation, Glenn R. Fuhrman, Ginny Williams and George R. Roberts. Additional support is provided by the Holenia Trust in memory of Joseph H. Hirshhorn, the Friends of Jim and Barbara Demetrion Endowment Fund and the Hirshhorn's board of trustees. The presentation at the Hirshhorn is coordinated by senior curator Valerie Fletcher. A 320-page catalog accompanies the exhibition.

Related Programs
The Hirshhorn offers a range of interactive educational experiences designed to engage people of all interest levels in contemporary art. Two special lectures and two films will give visitors an in-depth look at Bourgeois and her works. On Thursday, Feb. 26, at 7 p.m., art historian Donald Kuspit presents "The Phallic Woman: Conflict and Fragmentation in Louise Bourgeois' Conception of the Female Body." On Thursday, April 16, at 7 p.m., Hirshhorn senior curator Valerie Fletcher speaks on "Louise Bourgeois: The Past as Present." On Sunday, March 8, at 11 a.m., 1 p.m. and 3 p.m., the Hirshhorn screens "Louise Bourgeois: The Spider, the Mistress, and the Tangerine" (2008), a new film biography exploring the artist's themes and inspirations, including interviews and studio footage. On Sunday, April 26, at 11 a.m., 1 p.m., and 3 p.m., the Hirshhorn screens "La Riviere Gentille" (2007), the final documentary from a trilogy by filmmaker Brigitte Cornand, in which 96-year-old Louise Bourgeois is seen in the New York home she has not left for more than a decade. Alert, witty, tender and intense, the artist provides a rare glimpse of her integration of art and life.

Weekly Friday Gallery Talks—informal chats with artists and scholars that focus on one work in depth during a lunchtime tour—include one by an art therapist and another by a leading expert on spiders. The museum's ever-expanding library of podcasts (featured on iTunes in the top 100 Arts and Entertainment podcasts) make walkthroughs of galleries and interviews with curators and artists accessible internationally.

About the Hirshhorn Museum and Sculpture Garden
The Hirshhorn Museum and Sculpture Garden, the Smithsonian's museum of international modern and contemporary art, has some 12,000 paintings, sculptures, mixed-media installations and works on paper in its collection. The Hirshhorn maintains an active and diverse exhibition program and offers an array of free public programs that explore the art of our time. The museum, located at Independence Avenue and Seventh Street S.W. is open daily from 10 a.m. to 5:30 p.m. and admission is free. Visit http://www.hirshhorn.si.edu for more information or to download Hirshhorn podcasts on the collection and exhibitions, as well as talks with artists and curators.