The artist returns to the Steppes of her native Kazakhstan, where she conceives, stages and films mythological narratives, alluring her audience to partake in this visual journey. Her video "Kurban" (sacrifice/victim) unfolds like a modern day Iliad, within the ruins of the abandoned collective farms. 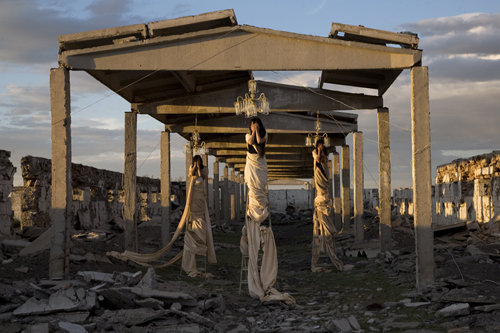 
Priska C. Juschka Fine Art is pleased to present Kurban, Almagul Menlibayeva’s second solo exhibition of video and photography at the gallery. The artist returns to the Steppes of her native Kazakhstan, where she conceives, stages and films mythological narratives, alluring her audience to partake in this visual journey.

Her video Kurban (sacrifice/victim) unfolds like a modern day Iliad. Within the ruins of the abandoned collective farms – once constructed by the deported people of the former Soviet Union, displaced by the government and forced to work in the gulags of Kazakhstan – a seemingly ancient world emerges. Women stand motionless and elongated on ladders, wrapped in shroud-like cloth resembling ancient statues. The architecture, reminiscent of the Greek Parthenon, provides the stage of a surreal world where only these ‘Goddesses of the Steppes’ remain. Expectant men watch from afar as young women in contemporary dress approach carrying a bound black sacrificial ram. As the ram is being dismembered, a child held by one of the mute and detached ‘living columns’ starts crying while the men are wailing. The episode leaps to the portrayal of a young shrouded woman with Shamanistic lamb sculls adorning her temples...

In a similar cryptic way, Menlibayeva’s video Exodus directs the viewer into present day Kazakhstan, where an equally strange and powerful tale unravels. While local men and women are in the process of packing up their Yurtas (nomadic tents) with the obvious intention to move on, a young girl watches, captivated and immobile, subsequently appearing to be left behind – synonymously invoking the experience of global uprooting. As an interlude and a visual bow to Kurban, two young women thrash their hair, symbolically morphing into birdlike creatures flapping their wings.

Paraphrased by Greek mythology as well as ancient Central Asian symbolism, Menlibayeva’s female figures hover continuously between Aphrodite, Medea and Peri, a powerful inner earth goddess, part witch/part fairy in early Persian mythology. Menlibayeva leads the viewer analogous to Euripides in his epic drama Medea, based upon the Greek priestess who ends up revenging the betrayal of her estranged husband by murdering her spouse and their children. She carefully guides the viewer into a dimension where ancient fears and desires play out the strength of a universal mythology and prevail by permeating existent emotional membranes of insecurity and self-defense to reveal archetypal residues of longing, seduction and destruction. Her storylines are full of connotations as Kurban and Exodus both point to the Old Testament as well as the Koran. While Kurban refers to the Abraham/Ibrahim conflict with God who wants him to sacrifice his only child Isaac/Ismael, Exodus relates to Moses leading the Semitic tribes out of Egypt. In her videos, Menlibayeva transmutes these mythological and historical accounts by assigning the traditionally male dominated roles to her women and their various engagements as Goddess/Priestess/Peri.

Almagul Menlibayeva was born in 1969 in Almaty, Kazakhstan and currently lives and works in Amsterdam and Berlin. She graduated from the Art and Theatre University in Almaty in 1992. Menlibayeva has gained wide international recognition having exhibited work in various museums and festivals, including the 37th Edition Film Festival, Rotterdam, Netherlands, 2008; the 52nd Venice Biennale, 2007; the Pompidou Centre of Modern Art in Paris, 2006; and the Sydney Biennale of Contemporary Art, 2006. Menlibayeva has most recently been commissioned to create her project Queens as part of the Tajarma/Translation exhibition at the Queens Museum, in partnership with ArteEast, in May 2009.