The artist's approach to painting is one of the most coherent and singular of his time. In line with his photographic teachings of the Dusseldorf Kunstakademie it consists in applying a prescribed formal resolution to a consistent subject matter. 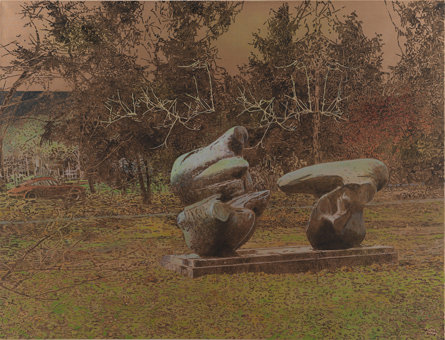 The directors of Thomas Dane Gallery are pleased to announce an exhibition of new works by German painter, Stefan Kürten. Kürten’s approach to painting is one of the most coherent and singular of his time. In line with the now notorious photographic teachings of the Düsseldorf Kunstakademie – where he also studied – it consists in applying a prescribed formal resolution to a consistent subject matter.

In Kürten’s practice this translates into a distinctive network of colours and decorative patterns, applied with the precision of a clock-maker, and interwoven with luxurious yet ambiguous bronzed, golden and silvered grounds. After previous series recording suburbia’s banal modernist aesthetic and ambivalent taste, Kürten’s present group of paintings focus on images of sculpture – from the small, decorative or votive object to the public monument. Unusually, these are drawn from his own photographic records of shops, school-yards, parks and cemeteries in Düsseldorf, New York and St. Tropez. The results vary from meticulously detailed depictions of dusty flea-market window displays to curiously unmodulated images of solitary public sculptures.

These intricate and atmospheric images of isolation encourage us to focus on the ageing monuments but also to meditate on the passing of time itself. Like snapshots, they capture and preserve a sense of nostalgia and fading memories.

Editor’s Notes
Stefan Kürten was born in Düsseldorf in 1963 and studied both at the Kunstakademie Düsseldorf and the Art Institute of San Francisco. He is currently showing at Cosar HMT in Düsseldorf. In 2007, a major exhibition, ‘Shadowtime’ travelled from the Kunstmuseen, Krefeld to the Royal Hibernian Academy, Gallagher Gallery, Dublin. Other recent exhibitions include ‘Die Kunst zu sammeln’, Museum Kunst Palast, Dusseldorf and ‘Bad Moon Rising’, Alexander and Bonin, New York. Kürten lives and works in Düsseldorf and New York.