In his paintings, the artist endlessly reconstructs and reconstitutes the landscape of the DMZ (Demilitarized Zone across the Korean Peninsula). Reworking fragments of terrain, blocks of land and water, he creates a world that functions according to the logic of its own terms. 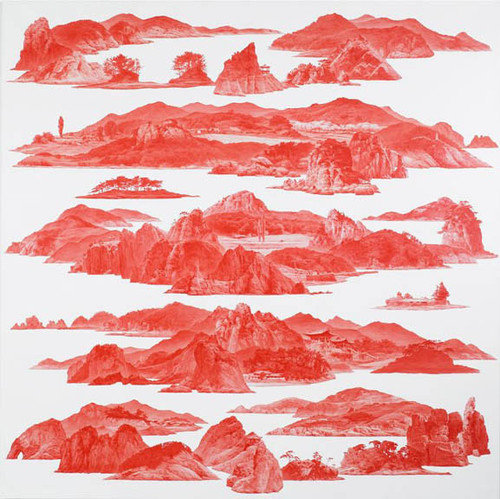 The Demilitarized Zone - known as the DMZ - cuts across the Korean Peninsula, acting as a buffer zone between North and South Korea. Sometimes referred to as the last front of the Cold War, it is a supremely ghostly landscape - a mountainous range that is seemingly untouched by civilization, and yet is also one of the most symbolically loaded landscapes in the world.

It could be described as the most natural and the most denaturalized landscape imaginable. While it is devoid of the usual markers of political ideology - monuments to present and past regimes, the likenesses of political leaders - the whole of the landscape is, in a sense, a subtle testament to the pervasive power of one of the most stringent ideological narratives of our time.

Korean artist Sea Hyun Lee locates his work in this setting. In his paintings, Lee endlessly reconstructs and reconstitutes the landscape of the DMZ. Reworking fragments of terrain, blocks of land and water, he creates a world that functions according to the logic of its own terms. In this sense, it is a world that is entirely hermetic - appropriately so, considering that the territory Lee depicts is defined by the very impregnability of its borders.

Lee works by using a manner of construction that is akin to collage, a constant and obsessive shuffling of recurring fragments. And indeed, the series Between Red is at first glance overwhelmingly simple. A series of landscape paintings is rendered in delicate washes of red. Large swaths of unmarked white meander between islands of crimson land. The blank spaces are harshly set against the carefully detailed fragments in red. Nonetheless, they cohere into the flawless totality that is created by each painting.

It is the fragmentation behind the landscape’s seeming totality that is operating at the core of Lee’s paintings. It is due to that fragmentation that these seemingly simple landscapes are able to evoke multiple dualities, a vast landslide of inconsistencies and fissures. This fundamental gesture of splitting, alongside its contrasting totality, is the uncanny tension that animates Lee’s paintings, and that makes them compelling both on a conceptual and a purely aesthetic level.