Rotterdam-based artists, architects and photographers present the city's architecture as a mirror of the soul. An approach reminiscent of the well-known cinematic imagery of Michelangelo Antonioni, in which the surroundings reflect the main protagonist's state of mind. The city becomes a projection screen for intense desires and melancholy. 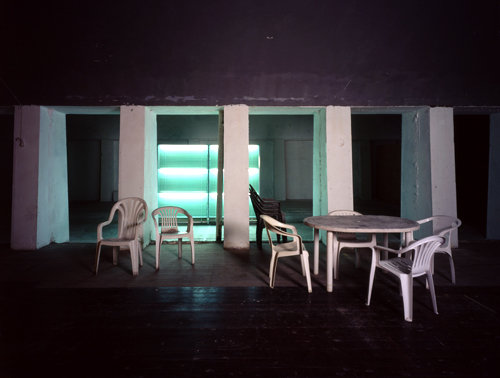 TENT. presents the exhibition La Luna Piena from 15 May through 29 June 2008. In La Luna Piena, Rotterdam-based artists, architects and photographers present the city’s architecture as a mirror of the soul. An approach reminiscent of the well-known cinematic imagery of Michelangelo Antonioni, in which the surroundings reflect the main protagonist’s state of mind. The city becomes a projection screen for intense desires and melancholy. Architecture and Rotterdam are inextricably linked. And yet the focus is not actually the urban landscape of Rotterdam, but the city’s potential to fire the imagination.

In the black-and-white photography of Awoiska van der Molen (1972), buildings appear to withdraw undisturbed from the speed of everyday existence. In recent years Van der Molen has travelled to various large cities in Europe, where she searched for her images in the sleepy districts on the edge of the city. Her nocturnal photos of streets show no trace of human activity.
Jan Adriaans (1972) photographs interiors in which the foreground and background, top and bottom seem to merge together. Every notion of spatiality disappears in the confusing relationship between scale and depth. In the photo series of an office building in Buenos Aires, the shell of the building becomes almost like flesh. The recent photos of semi-public buildings in Rotterdam show anonymous entrances, rooms and corridors in which he makes small interventions.
For his installations, Tonio de Roover (1973) uses plastic objects and items from everyday life such as Venetian blinds, bags and refrigerator trays. De Roover removes them from their natural habitat, combines them with other objects and often adds artificial light. The installation La Primavera (2007) features white garden chairs, a light object and other furniture. The arrangement has the character of a deserted film set in which the objects serve as props.
The film installation On Translation: Transparency / Architecture acoustique (2007) by Aleksander Komarov (1971) focuses on the concept of ‘translation’. Komarov filmed the Van Nelle factory in Rotterdam and the new Reichstag in Berlin and makes an associative connection between the symbolism of transparency in early modernist and contemporary architecture. The film is combined with ambient sounds and music by Gleb Shutov and Elvira Plenar. In the video installation See You in Disneyland (2006), we see a film portrait of the Volkspalast, the best-known ruin of the East German section of Berlin. In mid 2006 the demolition began, which was strongly opposed by protestors.

The architectural firm Monadnock was founded in 2006 by Job Floris, Sandor Naus and Floris van der Poel. In the summer of 2007 the firm won the competition to design a beach pavilion intended for the Strand aan de Maas in Rotterdam with a design that includes references to other public and historical architecture. Monadnock regards the city as a landscape in which the elements change at different rates. Buildings change very slowly and constitute the hardest material, similar to a monadnock, the type of mountain that is left standing in a landscape after a long process of erosion.
Finbarr McComb and Pieter Sprangers founded the firm Stereo Architects in 2006 after winning the architecture competition Europan 8 (together with Lola Landscape Architects). In their models and proposals, the architects allow themselves to be influenced by the existing urban context, as in their design for the mayor’s residence Oude Willem on the Noordereiland.