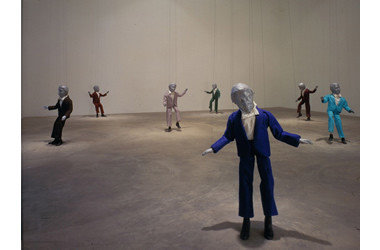 International in scope, The Puppet Show features extraordinary works in different media by acclaimed contemporary artists that explore the imagery of puppets. The exhibition includes actual puppets—marionettes, shadow puppets, and hand puppets—as well as works that evoke topics associated with puppetry—manipulation, miniaturization, and control—while others introduce intriguing new perspectives of the puppet theme. All the works are movable and/or moving objects that function as alter-egos for the artist or as human surrogates—often with wicked good humor.