Childstar. Interested in sculptures formal language and its material presence, the artist uses furniture sourced for its distinctive quality and appearance and reconstructs it through experiments in form, colour and placement. 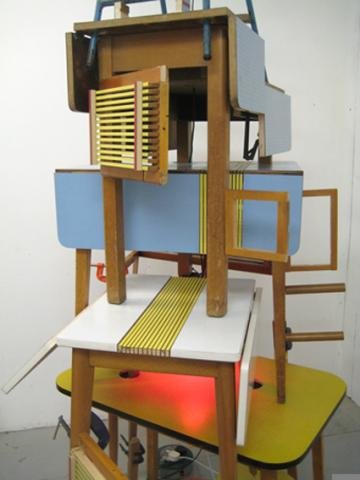 Michael Samuels tests the boundaries and our preconceived ideas of objects and space, presence and absence and fiction and reality. Interested in sculptures formal language and its material presence, Samuels uses furniture sourced for its distinctive quality and appearance and reconstructs it through experiments in form, colour and placement.

Reconstructed and refigured, sliced and spliced, the new forms created by the artist are deprived of their original function. Rather, they take the form of monumental and playful structures fulfilling ambitions beyond their sole purpose. Tables balance precariously upon each other, formal shapes are cut from tabletops only to reappear elsewhere, table legs, free from their original role, pervade new territory, whilst other tabletops are united so that colours sit alongside each other forming contrived hybrid surfaces. In many instances coloured light and LED’s are incorporated into the arrangements, so that everyday Anglepoise lamps sit upon dysfunctional tabletops casting carefully selected coloured light which at once infiltrates space and questions what sculpture can be.

In a similar move to the Deconstructivist architects Samuels questions the functional aspect of Modernist simplicity but also places the furniture within a new dislocated space so that the familiar is made strange; unheimlich, or unhomely. A further similarity can be seen with Schwitters Merz pictures - which can be read as the artist’s own programme of displacement - or his later Merzbau installations. Like Schwitters work, Samuels sculptures are juxtapositions of abstraction and realism and a balance between content and form. What at first it appears to be playful and instinctive decisions made by the artist are soon exposed as being carefully considered and conceived sculptures. The artist’s most recent sculptures hold a significant presence, dominating the space, and in instances towering over the viewer, they appear both optimistic and precarious and are a triumph in composition.

Michael Samuels graduated from the Royal College of Art in 2000. He has exhibited throughout the UK, including the Millenium Galleries in Sheffield, The Northern Gallery of Contemporary Art, Gasworks, The Pump House and the Djanogly Gallery and has been nominated for this year Jerwood Contemporary Painters. Samuels has had solo exhibitions at the Architectural Association and this is his second solo exhibition at Rokeby. Internationally, he has exhibited in China, America and Europe; his work can currently be seen in Idylle at the National Gallery of Prague, later in the year he has solo exhibitions in America and Berlin. His work is in international collections including The Zabludowitz Collection and the collection of David Roberts