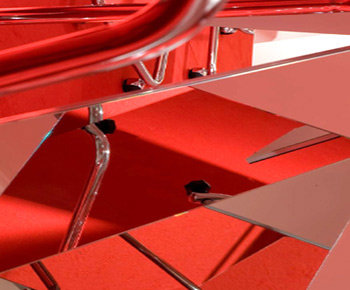 “I am inclined to believe that precisely because we are bodies and possess perceptive mechanisms we also possess a concept of time. I suspect our ability to construct time is predicated on the manner in which the body integrates its perceptions and upon the action necessary to generate these perceptions.”
(William Forsythe, From the exhibition catalogue)

William Forsythe is one of the most significant and innovative choreographers working in the area of contemporary dance today. While director of the Ballet Frankfurt and now, with The Forsythe Company, he has dared to transcend the boundaries of his genre, to great international acclaim. Working on the globe’s major stages, he has redefined the parameters of the performing arts.

Through his oeuvre, Forsythe has made a major contribution to expanding how dance is perceived. In this exhibition, he presents new installations and films, which the visitor experiences as choreographic spaces. Using performance, installation and dance, the exhibition provides a multilayered encounter with the human body and physical space, as well as with choreography per se and its production strategies.

A number of the works on display in the Ursula Blickle Foundation will be accessible to the general public for the first time, independently of their original staging, thereby offering a representative overview of Forsythe’s repertoire of installations. As a stand-alone compendium of his choreographic works and performances, the installations on view provide a formal vocabulary that draws the viewer into a multifaceted space-body continuum. Forsythe’s objective is thus to expand the possibilities of how dance is performed and perceived. “The Defenders” enacts a sentence from philosopher Blaise Pascal which perceives the foibles of human inattention as a moral inversion of the strangest kind. The spectators’ expectations of a successful performativity and the confounding of those expectations are forces that direct their bodies around the work.

“You Made Me a Monster Partitur” – an additional work that can also be seen in the exhibition – is an example of Forsythe’s attention to the problematic of assumptions about literacy. Dramatic as one of the work’s subjects is, the actual focus of the installation is dimensional translation: something a dancer does every day with countless perceptions, the results of which constitute concrete marks in the medium of time. The question raised is, must literature be sustained in time to be considered such. The pieces will be staged again at the exhibition’s opening in the Ursula Blickle Foundation. Two videos, which will premiere during the exhibition, provide a glimpse of Forsythe’s approach to creating moving images in myriad forms by referencing the physical body as well as time and space – three parameters that all play a key role in the works on display throughout the exhibition.

The exhibition was developed by William Forsythe
in cooperation with Markus Weisbeck.

An exhibition catalogue is also available, documenting a dialogue between Daniel Birnbaum and William Forsythe. The catalogue is published by jrp/ringier, Zürich.
Designed by http://www.surface.de