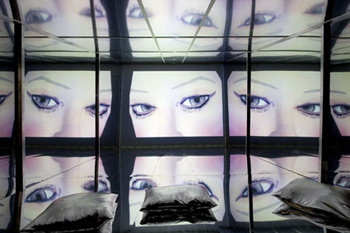 A nomadic screening room conceived and produced by Hermès
Mudam is hosting H Box, an original project from Hermès intended to travel between several museums around the world. After the Centre Pompidou in Paris and the Musac in León, H Box is now presented at Mudam Luxembourg before leaving for the Tate Modern in London and the Yokohama-Triennale in Japan. In a productive-innovative spirit, Hermès created H Box, both an annual commission of video art works, and a travelling screening space. Created by the artist, architect and designer, Didier Fiuza Faustino, H Box is a work of art in itself, a sort of mobile and functional “camera obscura”. The programme of video works has been entrusted to Benjamin Weil, director of Artists Space in New York. For this first edition, the choice has fallen upon eight very diverse, upcoming artists.
Consisting of two entirely collapsible modules constructed of aluminium and Plexiglas, H Box can be assembled, disassembled and transported as required. Raised 30 cm above the ground on its adjustable feet and swivel wheels, it might look as if it were taking off were it not for the gangway that offers access to the interior. The principal facade, entirely transparent, is more than a window or an invitation to enter: an eye on the world, a direct access to light, it makes H Box a private space open to the images around. The cutting-edge sound and image technology draws viewers deep into the projected art.

Mudam Luxembourg presents China Power Station: Part III, the third step of an exhibition project created in collaboration with the Serpentine Gallery in London and the Astrup Fearnley Museum of Modern Art in Oslo.

China Power Station: Part III is the result of long research work that curators Julia Peyton-Jones, Hans Ulrich Obrist and Gunnar B. Kvaran carried out in various Chinese metropolises. The project was created as an evolving, dynamic exhibition, reflecting the surprising developments that the Chinese cultural scene has experienced over the last few decades. A first exhibition was held by the Serpentine Gallery at the acclaimed Battersea Power Station in London, and a second in Astrup Fearnley Museum of Modern Art in Oslo. After its presentation in Mudam, the exhibition will mark its final step in Beijing in autumn 2008. Each stage is structured around a different selection of artists and works of art, devised according to the context in which they are presented.

The exhibition at Mudam aims to link the generation of artists who emerged in China in the 1980s, a time when China underwent a surprising artistic explosion, with a younger generation of artists who appeared on the international artistic scene from 2000. Unlike their elders, who mostly began their careers in the West, these artists have decided to stay in China in order to witness the profound social, political and economic changes the country is going through and be actively involved in them.


China Power Station: Part III explores the themes linked to urban space, the historic and contemporary situation in China, and to everyday spaces. It marks, through the example of a country which is currently undergoing accelerated economic change, together with the danger of unrestrained urbanisation and uniformity connected to globalisation, the ways in which current artistic practices respond to the challenges which stimulate the contemporary world. It shows a particular interest in the quest for modernity and a return to tradition while revealing a real sensitivity towards urban and environmental transformations.