No One is Innocent. Looking back from a distance of thirty years, the exhibition, focusing on the three metropolises New York, London, and Berlin as examples, reveals how differently and yet consistently Punk as a metaphor of revolt influenced music, fine art, and the look of young people in various cultural spheres. While it was mainly a style and fashion phenomenon in England, a close association between artists and Punk musicians was characteristic of the scene in the USA and Germany. Curator: Thomas Miessgang. 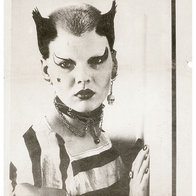 Besides Hip Hop, Punk was the last global pop-cultural movement that aimed to be more than just an acoustic furnishing of teenager bedrooms: a complete upheaval in fashion, gestures of style, artistic forms of expression, and music from the improve the world poses rampant in the sixties’ Summer of Love to the nihilism and no future slogans of the Winter of Hate ten years after; from the soft and shapeless psychedelic color games to the sharp contrasts and angular designs of the neon and plastic era. Punk was about an attitude of protest fuelled by the spirit of the Situationist International, an extreme left-wing group of European artists and intellectuals who lived for “carrying gasoline to where there was fire” (Guy Debord).

The exhibition Punk. No One is Innocent, which focuses on the three metropolises New York, London, and Berlin as examples, reveals how differently and yet consistently Punk influenced the fine arts, young people’s looks, and the ciphers of revolt in different cultural spaces and socio-political milieus. While it was mainly a style and fashion phenomenon in England, where it brought forth a typical graphic art, a close association between artists and punk rockers characterized the scene in the USA and Germany from the very beginning many of the artists and avant-garde filmmakers like Jim Jarmusch, Wolfgang Müller, Alan Vega, and Salomé also played in bands.

Pop theorist Greil Marcus remarked about the Sex Pistols’ song “Anarchy on the UK,” which all of a sudden made the phenomenon of Punk hit the front pages throughout the world: “It is just a pop song, a would be, has been hit record, a cheap commodity. […] It is a joke and yet the voice that carries it remains something new in rock ’n’ roll, which is to say something new in postwar popular culture: a voice that denied all social facts, and in that denial affirmed that everything was possible. It remains new because rock ’n’ roll has not caught up with it.”

The vanguard of the British Punk movement comprised the manager and anarchist intellectual Malcolm McLaren, the fashion designer Vivienne Westwood, and the graphic artist Jamie Reid. Together, they created a visual corporate identity of Punk which several generations would draw on: a safety pin in Queen Elizabeth’s cheek, t-shirts with shock motifs, S/M fashion for the subversive flâneur, typographical solutions featuring letters cut from newspapers that imitated blackmail notes. The idea of punk was an assault on the masses’ consciousness. The public was symbolically taken hostage and bombarded with demands, impositions, and optical shocks.

Though the British semiotics guerilla may have originally intended to distil “cash from chaos,” things soon took a different turn: Punk turned into a turmoil of signs and emblems, a cacophony of ideologically KUNSTHALLE wien, Punk. No One is Innocent, 3rd press release, April 2008 molded meanings transformed into an annihilation of meaning with destructive furor. From today’s perspective, it is less the (after all) rather one-sided musical dimension of Punk that has brought to bear a sustainable impact, but the play with iconographies and art-immanent relationships, the mentality of unswerving negation opening up spaces of the possible. Punk made you feel how it was to have been lost to the world and to pursue the genesis of a new individuality in subjective dreams at the same time.

The exhibition Punk. No One is Innocent in the Kunsthalle Wien shows that Punk was a radical aesthetical statement which mainly showed itself in a revolution of signs and triggered productive irritation with its DIY approach. The optical traces of this movement, which has become part of history for quite some time now, have informed artistic modes of expression to this day and long since entered the gallery and fashion mainstream through protagonists such as Laurie Anderson und Vivienne Westwood. Apart from works of art, the exhibition includes historical artifacts such as flyers, record sleeves, manifestos, and photographic documentations, as well as typical style emblems which still become manifest as the genetic code of a pop-culturally encoded White Riot today.

Catalogue: A catalogue with texts by Thomas Mießgang, Wolfgang Müller, Glenn O’Brien, and Jon Savage will be published to accompany the exhibition.