The theme of the First Annual Moon River Sculpture Festival, lays bare the foundation for future sculpture theme parks in China. At the heart of the show, the notion of "Yin Shui Si Yuan" (not to forget one's origin) establishes a meaningful connection to both its conceptual strands and the location. With more than 100 Chinese contemporary artists invited to participate to this grand event, the large scale sculptural exhibition held outdoor with 105 pieces, an indoor exhibition features paintings and smaller sculptures by a large variety of younger emerging artists. 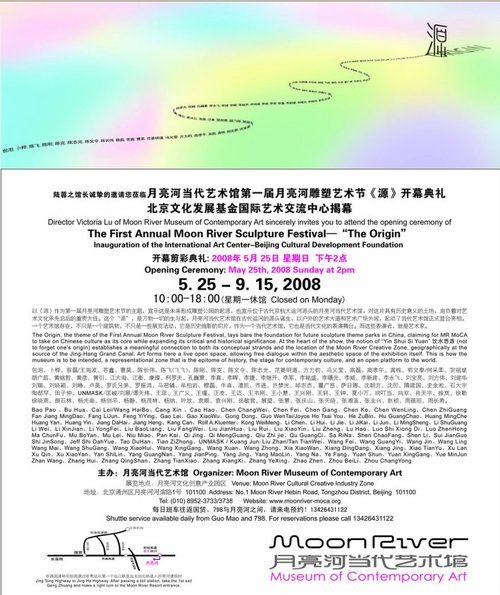 The Moon River Museum of Contemporary Art (MR MoCA) is launching its First Annual Moon River Sculpture Festival on May 25th. The event is organized by Victoria Lu, Director of the MR MoCA and her team. This outdoor sculpture exhibition is the highlight of the preparation activities leading up to the grand opening of the museum in the fall of 2008. The Moon River Sculpture Festival launches in May and is one of two annually held grand exhibitions, the other to be the Asia Art Festival held in autumn that will feature as the 2008 inaugural exhibition of MR MoCA.

The Origin, the theme of the First Annual Moon River Sculpture Festival, lays bare the foundation for future sculpture theme parks in China, claiming for MR MoCA to take on Chinese culture as its core while expanding its critical and historical significance. At the heart of the show, the notion of “Yin Shui Si Yuan” (not to forget one’s origin) establishes a meaningful connection to both its conceptual strands and the location of the Moon River Creative Zone, geographically at the source of the Jing-Hang Grand Canal (a main artery running from south to north dating from the 5th century BC).

With more than 100 Chinese contemporary artists invited to participate to this grand event, the large scale sculptural exhibition held outdoor with 105 pieces featuring among others Wang Guangyi, Yue Mingjun, Xiang Jing and Wang Shugang, also presents 20 works especially commissioned for the occasion to outstanding artists like Sui Jianguo, Chen Chang wei and Ye Fang. Also an indoor exhibition held at the MR MoCA Temporary Space (by the Sales Center), will feature paintings and smaller sculptures by a large variety of younger emerging artists such as Mu Lei, Yang Na, and Yang Guangnan.

Long since its departure from the conventional function of the monument and breakthrough into the “expanded field” of representation, sculpture has always been the most powerful device depicting the complex dynamics negotiating public space and human presence within. The idealist space that outdoor sculptural objects forge as a logic extension of architecture has thus become a self-referential powerful media in its own right, displaying the pragmatic, the aesthetic, the conceptual, or the commemoratory. Furthermore its symbolic character is one that best succeeds in translating the meaning of interaction into an actual environment of dialogue between culture and nature, human space and thought, especially as the rampant development of both urban and social spheres in the Chinese reality is forwarding interests and reflection on the use of public space and the relationship artistic interventions maintain to it.

Exemplary is the latest artwork by Sui Jianguo, The Chord, which consists of seven steel tubes measuring 38 centimeters in diameter and 12 meters in height, installed directly into the ground facing the entrance of the plaza, and surfacing into increasing height. The Chord, Xian 弦 (which reference specifically ancient Chinese string instruments) is here used as a metaphor for the first and last quarter in the moon cycle, the evolving nature of history and culture. The vertical steel tubes signify the unique location of Moon River at the North-South transportation junction of the Grand Canal, while the five classis colors added to black and white, more literally refer to the long history of the Grand Canal itself. The Chord continues to uncover Jianguo’s thought and exploration of the environment and space in recent years. The three dimensional space of the sculpture here embedded into the dimension of time, takes the work to another level - it is not just a representation of reality or a simple replacement of entity with concept, but a more profound and extensive view and narration. This piece both carries on the artist’s outlook on history and a recollection of today’s thriving China. The steel rods are employed as medium and symbolic material to evoke the nature of the new Chinese metropolis, while effusing the site - the rhythm of the changing heights of the columns, with loosened associations between the visible and the invisible, Yin and Yang, black and white, the vivacity of the Grand Canal and the founding of the Moon River Art Museum as a landmark filled with philosophic thoughts within.

Most of the outdoor artworks in this exhibition are modeled after the new century aesthetics of the Animamix, a term coined by Director Victoria Lu. This sculptural ensemble is meant to create a happy, relaxing, humorous, ironic, young and colorful atmosphere incorporating different elements retrieved from popular culture, while denoting the differential character of aesthetic forms generating out of a mass and consumerist culture constructed upon hedonism and sensual gratification. In this sense it also appeals to the goal of the Moon River Culture and Creative Industry Zone to become a distinguished and innovative creative base station. Under the concept of Animamix in the new century, the exhibition aims at communicating and putting in dialogue art and design and their dynamic and diversified elaborations. The worship of beauty and youth, the challenge against the gaudy, or the criticism of reality, each senses the new age. In order to correspond with the grand opening of the Moon River Art Boulevard and Plaza, the sculpture exhibition, as a form of public art, references the connection between art and its public perception. The museum becomes a medium to propel display and exhibition practices without physical restriction and within people’s awareness and daily lives. It therefore integrates a concept of shared and conversational space led by true aesthetics yet opening up its possibility to free and equal exchange between the artworks and the audience. This semi-permanent sculptural exhibition creates a temporary space for collective gathering and while establishing MR MoCA as a cultural destination it shapes the pragmatic and physical possibility of intellectual encounter, civil gathering, in essence it realizes public space as truly being a moment in time and place that is collectively created by people’s interaction and communication, not by imposed physical delimitations. Art forms here a live open space, a space that allows free dialogue within the aesthetic space of the exhibition itself. This is how the museum is to be intended, a representational zone that is the epitome of history, the stage for contemporary culture, and an open platform to the world.
The Moon River Museum of Contemporary Art plans to strengthen the influence of contemporary art in Asia and increase its international visibility by organizing national and international expositions in the future. The sculpture festival held annually in May takes advantage of the unique geographical environment of Moon River. Centered along the MR MoCA, the Moon River Cultural and Creative Industry Zone will be the home to an exquisite lifestyle. It will steadily become a new territory in creative cultural life, including domestic life, travel, leisure, sports, retreat, and a leader amongst the concept of an innovative art museum.

A catalogue of the exhibition will be available shortly after the opening of the show, published by the Today Art Museum publishing house.