The exhibition curated by Banu Cennetoglu and Philippine Hoegen presents artist books, paintings, and documents by and about artist. Bodybuilder, poet, painter: these and other occupations describe Gul even if he remains best known as a Turkish actor of Armenian origin who played minor roles in over 300 obscure films in the course of his life. 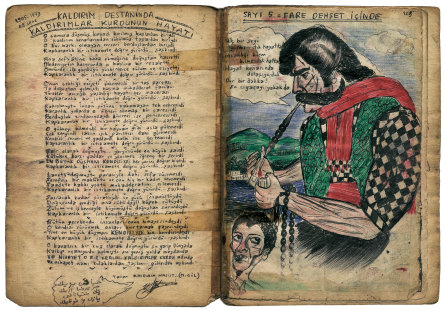 On May 22, 2008, the 5th berlin biennial for contemporary art, entitled When things cast no shadow, opens the fourth of five alternating, artist-curated solo shows at the Schinkel Pavillon. The exhibition curated by Banu Cennetoğlu and Philippine Hoegen presents artist books, paintings, and documents by and about Masist Gül. Bodybuilder, poet, painter: these and other occupations describe Masist Gül (* 1947 in Istanbul  † 2003 in Istanbul), even if he remains best known (though the term is relative) as a Turkish actor of Armenian origin who played minor roles in over 300 obscure films in the course of his life.

His passing has left behind a large number of collages, drawings, and poems, most still unknown today. The autodidact’s most ambitious work is Kaldırım Destanı—Kaldırımlar Kurdunun Hayatı (Pavement Myth—The Life of the Pavement’s Wolf), a six-part serial narration in the form of handmade comic books, produced in the 1980s but never published in Gül’s lifetime. Each of the six books begins with poem-like texts summarizing the madcap plots, each of which rehearses a similar story of human struggle between good and evil. The cycle, whose final volume remained unfinished, tells the story of Kaldırım Fahri (Pavement Fahri) in a sequence of flashbacks woven together into a retrospective narrative spanning from 1905 to 1978: from a childhood in the clutches of a wicked witch to her defeat and from Fahri’s rise from Bog-rat to Pavement Wolf, protector of the poor and outcast.

In 2006, Pavement Myth was recovered from near obscurity by Banu Cennetoğlu’s artist-run space BAS and published in Istanbul in a facsimile edition of Cennetoğlu’s and Philippine Hoegen’s Bent series of artists’ books, making Gül’s books publicly accessible for the first time. After Istanbul and Brussels, this will be the third occasion that Cennetoğlu and Hoegen also display Gül’s paintings, notebooks, and other objects from his estate. Points of contact intertwine and processes of identity construction are revealed as both the bodybuilder physique and protector personas of the Pavement Wolf and Gül blur between the pages of his carefully crafted books and other work.

The Schinkel Pavillon, located behind the Kronprinzenpalais Unter den Linden, was inaugurated several weeks before the opening of the 5th berlin biennial and will continue several weeks after it ends. Artists invited to the biennial have selected the artworks, envisioned the layout, and designed the display structures for each exhibition of a figure whose work has inspired or been of importance to their own practice. Each solo exhibition will be in dialogue with some of the newly commissioned artworks presented elsewhere in the 5th berlin biennial, thus offering audiences a view onto the way younger artists engage with another generation and with countercurrents of the modernist experiment.