The exhibition is part of a large scale project that has been in progress for two years. During that time, the museum has focused on what have become sensitive issues for the Netherlands, such as identity, nationality, citizenship and social cohesion. Twenty one of the thirty seven participating artists have conceived new works for the exhibition, guided by three broad directional themes: Imaginary Past, Imaginary Present and Imaginary Future. 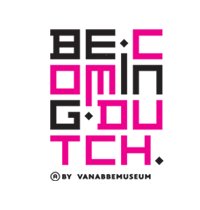 curated by Charles Esche and Annie Fletcher, director and curator of the Van Abbemuseum, respectively.

The exhibition Be(com)ing Dutch is part of a large scale project that has been in progress for two years. During that time, the museum has focused on what have become sensitive issues for the Netherlands, such as identity, nationality, citizenship and social cohesion. In those two years artists, intellectuals, politicians and the people of Eindhoven were invited to find possible answers to awkward questions. What does -Being Dutch' or -Becoming Dutch' mean in the 21st Century? Who are -the Dutch' anyway and how do we want to be seen by ourselves and others? The outcome of this whole process is being shown in an exhibition of artists' works in the museum and throughout the city of Eindhoven.

Be(com)ing Dutch is unusual in the Netherlands because it takes on an outright political and social subject and translates it into artistic terms. Since 2006, when the Van Abbemuseum was awarded a prize that made it possible to turn our existing ideas into reality, the discussion in the Netherlands about who we are, where we come from, where we are heading and about our norms and values in a globalising world has become even more topical and urgent. The long term planning allowed the museum to talk with people at length and to organise major public discussions such as the Eindhoven Caucus. Now it is the turn of artists, many of whom have participated in all the stages of Be(com)ing Dutch, to show you what they have found. Twenty one of the thirty seven artists have conceived new works for the exhibition, guided by three broad directional themes: -Imaginary Past', - Imaginary Present' and -Imaginary Future'. Enjoy!

The Question Paintings March
Saturday 24 May from 15:15 h.

What defines the Dutch identity? How did we become what we are? These topical and pressing questions are playing on many people’s minds. Potential answers are to be found at the Be(com)ing Dutch exhibition, a dynamic programme that is being staged at the Van Abbemuseum and elsewhere in Eindhoven throughout the summer. More than 35 Dutch and international artists, 20 of whom created new work especially for the event, respond to the question of what it means to live in the Netherlands.

Lively opening parade
Be(com)ing Dutch opens on Saturday, 24 May with The Question Painting March, a cheerful, carnivalesque parade staged by the Thai artist Surasi Kusolwong. The parade is the result of many months of collaboration between the artist and diverse cultural groups from Eindhoven: dancers, performers, activists, musicians and museum visitors. Participants in the parade will be carrying placards with questions such as ‘Can I live without hope or fear?’ and ‘How did I get here?’. The procession will follow the traditional carnival route through Eindhoven, starting at the Van Abbemuseum.

Be(com)ing Dutch in the museum
The Be(com)ing Dutch exhibition at the museum is composed of three sections: past, present and future. The imagined past presents work by renowned Dutch artists such as Ed van der Elsken, Johan van der Keuken and Gerrit Dekker, their work addresses travel, cosmopolitanism and cultural diversity. An exploration of cultural and colonial relations between the Netherlands and Indonesia is seen in Wendelien van Oldenborgh’s new film installation, No False Echoes. Abdellatif Benfaidoul assembled fragments from documentaries for a film full of clichés, preconceptions and exposés relating to the experiences of Moroccan migrants.

The imagined present considers contemporary reality.
Italian artist Mario Rizzi followed the Dutch ‘civic integration’ process from close quarters for five months to produce the film Congratulations, and Ilya Rabinovich, in his installation Rear Window, transports the public into the dark where one tries to peer into the domestic world of Dutch living rooms. Lidwien van de Ven made a new series of photographic portraits of Ayaan Hirsi Ali and Dyab Abou Jahjah, and a sound piece by Lebanese artist Rana Hamadeh investigates the different reactions to, and interpretations of, her work in the Netherlands and Beirut. (Re)Collection of Togetherness, an ongoing project by Tintin Wulia, tells the story of a family that lives in Indonesia, Paris and Almere. With a collection of more than 100 passports from all over the world she has created a surprising work composed of a worldly palette of colours.

For The imagined future, the Indonesian artist Agung Kurniawan guides the visitor into the Museum of Misunderstandings; a large installation intended to unveil current absurdities and miscommunication regarding cultural prejudices and traditional cultural artefacts. Surasi Kusolwong devised a large multimedia installation in answer to what ‘originality’ means in the visual arts of the Netherlands and Thailand. Artist Fiona Tan presents her remarkable film, Tomorrow.

Be(com)ing Dutch in the city
A whole series of public events is being held in Eindhoven, both before and during Be(com)ing Dutch. For example, internationally renowned photographer and filmmaker Phil Collins devised the public project Free Fotolab, inviting all Eindhoven’s inhabitants to have their old negatives developed for free at a photography shop opposite the museum, thereby aiming to show the hidden images of Eindhoven, its inhabitants and their personal lives. The artists Bik Van der Pol are organizing the performance event Close Encounters in the Evoluon, in an attempt to challenge different communities and generations to join forces in order to ask the question if a collectivity of mental willpower is able to create a feat of strength.

The Mondriaan Foundation awarded its 2006 Development Prize for Cultural Diversity to the Van Abbemuseum for the Be(com)ing Dutch project. Within this project’s framework, the museum has organized a diversity of gatherings over the last two years resulting in The Be(com)ing Dutch exhibition.

A comprehensive catalogue will be published in autumn 2008.