This exhibition explores the connections between science, art and irrational beliefs - spiritualism, magic, etc. - in the 19th and part of the 20th centuries. Seven European artists, most of them showing in France for the first time, confront this aspect of cultural history from a complex, ambiguous standpoint whose critical detachment does not exclude the appeal of the past and the mysterious. Curated by Simone Menegoi. 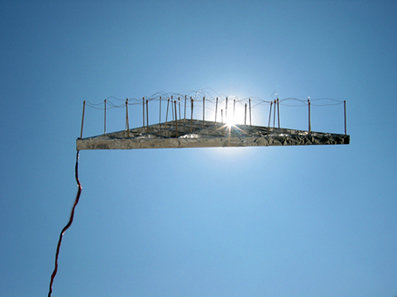 As part of its international outreach strategy, La Galerie is continuing its programme of residencies for curators from abroad. This year it is welcoming Simone Menegoi for a three-month residency in Noisy-le-Sec in order to realise the exhibition “Tales of Disbelief”. This exhibition explores the connections between science, art and irrational beliefs – spiritualism, magic, etc. – in the 19th and part of the 20th centuries. Seven European artists, most of them showing in France for the first time, confront this aspect of cultural history from a complex, ambiguous standpoint whose critical detachment does not exclude the appeal of the past and the mysterious.

A description of this standpoint could draw on the famous aesthetic theory of Samuel Taylor Coleridge. The English Romantic poet was convinced that the relationship of the reader to a work of fiction was based on the “suspension of disbelief”, a temporary abandoning of the critical faculty which allowed for emotional involvement in the narrative. The paradoxical title “Tales of Disbelief” alludes to the opposite possibility, imagining a relationship with narrative that is based on both belief and doubt: a relationship which is neither credulous nor merely sceptical, neither nostalgic nor indifferent, but which simultaneously embraces all these possibilities and provides a provisional resolution of their antagonism.

In addition to their interest in the links between science, art and the irrational, the artists taking part in the exhibition have certain aesthetic positions in common. Preferring such historic media as film and vinyl records, they deliberately eschew the digital. They make use of painting and figurative drawing – the oldest techniques for representing reality, or at least creating illusion – and revive inventions and techniques which, obsolete to the point of being unheard of, take on a new aesthetic power. Thus the works in “Tales of Disbelief” offer the viewer a dual relationship with their content: on the one hand they invite us to an awareness of the historical distance that separates us from certain beliefs and cultural attitudes; and on the other they demonstrate their enduring charm as a contemporary response to the need for the irrational.

Athanasios Argianas's sources of inspiration range from the first electronic instruments to machines imagined by the writer Raymond Roussel in his novels, from the abstract sculpture of the 1920s to folk art. Via these associations, Argianas' painting and sculpture conjure up a parallel universe in which hitherto unsuspected associations emerge. What regulates this world is the geometric spirit that appears in all the artist's works, both visual and musical, and that tends to make them self-sufficient and self-referential. His compositions are based on traditionallycompleted forms that return back on themselves (like the canon) and on permutative processes. Ulla von Brandenburg is interested in the ties between art and magic – as much in the sense of conjuring as of some presumed access to the supernatural. As tools for illusion, magic and art remain bathed in an aura of mystery as regards their essence and mechanisms, and so play on the viewer's expectations and desires. This artist's watercolours, wall drawings, performances and 16mm films make frequent allusion to the 19th century, when this affinity was stronger and more visible, and also to the art that expressed it the most: theatre.

Kit Craig chooses images evocative of esoteric beliefs and analyses their structure by turning them into small abstract sculptures of clay, wood, cardboard and other materials. The sculptures then serve as a starting point for drawings – a further step towards analysis and demystification. In the course of this dual transition the originals lose their inherent mystery; but via a kind of revenge, the drawings then take on an unexpected dimension, offering strange objects, Surrealist assemblages, machines whose workings defy understanding, and scientific curiosities. Sculptor and video-maker Christian Frosi!s work starts out neither from objects nor images, but from the beliefs that generate them and from our relationship with those beliefs. At the same time he compares scientific principles and strives to foreground their psychological and emotive content. The sculpture Ricostruzione approssimativa di un esperimento di levitazione elettrostatica [Approximate Reconstruction of an Electrostatic Levitation Experiment] (2005), for example, provides all the preconditions for the experiment without really managing to pull it off. What counts for the artist is not so much the concrete outcome as the viewer's expectations, even when he disappoints them.

João Maria Gusmão and Pedro Paiva are fascinated by origins: those of contemporary science, and also those of the media and means of expression. In 16mm silent films, photographs and installations they recreate the stunned admiration someone of the early 20th century might have felt when confronted with the latest scientific and technological innovations; these discoveries made it all the easier to accept such presumably supernatural phenomena as telekinesis and the ability to become invisible. Nick Laessing takes a fresh look at the history of science, concentrating on aspects of it that now look like fringe fantasies. He overlays his position as artist on that of the amateur scientist, a type of researcher who has since fallen victim to growing specialisation but was a decisive factor in the progress of modern science. With his machines and installations Laessing seems bent on rediscovering the basic laws of physics via direct empirical experience; in his videos he documents scientific figures who really existed but were so eccentric that they now seem imaginary.

Goshka Macuga's approach tends to dissolve the boundaries between artist, collector and exhibition curator. She sets up sophisticated installations in which image storage and exhibition design slide away from their contemporary expert criteria towards a “cabinet of curiosities” rationale. Magic (2006) comprises 240 images from the Victorian era taken from Magic: Stage Illusions, Special Effects and Trick Photography (1898), a book famous in its time because it exposed most of the ruses used to create the illusion of psychic phenomena for the camera or in public.

“Tales of Disbelief”: curator
Since 2006 La Galerie has been offering three-month residencies to foreign curators selected after a call for applications. The residency is intended to allow the visiting curator to become acquainted with the French art scene – artists, art professionals, venues, etc. – and to present an exhibition at La Galerie. This year's choice is Italian curator Simone Menegoi, born in Isola della Scala in 1970 and now working in Verona. Lasting from 2 April – 30 June 2008, his residency will allow him to mount the exhibition "Tales of Disbelief". Since 2007 the foreign curator residency has been receiving additional support from the Drac Ilede- France – Ministry of Culture and Communication.

In parallel with the exhibition