Art in Digital Culture. Proposal for Municipal Art Acquisitions 2008: The jury, chaired by guest curator Andreas Broeckmann, has selected 18 artists out of the 200-plus submissions. In the course of the exhibition, director Gijs van Tuyl will select works to be acquired for the museum's collection. However diverse the media employed, all the works reveal how visual imaginations and artistic perceptions are changing in today's digital age. 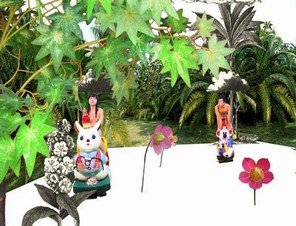 Deep Screen – Art in Digital Culture presents contemporary works of art which are all in some way marked by today’s digital culture. The jury, chaired by guest curator Andreas Broeckmann, has selected 18 artists out of the 200-plus submissions.

In the course of the exhibition at the Stedelijk Museum CS, director Gijs van Tuyl will select works to be acquired for the museum’s collection.

The increasing digitalisation of our culture has consequences for the arts. We take instant photos with our cell phones, pick out the shots we want in the blink of an eye on the computer screen, and create our own version of reality using Photoshop and iPhoto. The influence on the visual art world is apparent in the temporary nature of the images used and the centrality of process, repetition and change.

The submissions range from paintings, drawings, photography, sculpture and installations right through to video artworks and generative software art. However diverse the media employed, all the works reveal how visual imaginations and artistic perceptions are changing in today’s digital age. For example, Gabriel Lester will exhibit video images of landscapes which are made by robot cameras and focus attention both on the idea of artistic intention and on the inclination of viewers to romanticise what they see. Meiya Lin exploits the universal visual language of the video clip. The styling looks Asian but, because the decor is stripped of all real stylistic features, the end-product is devoid of style: a commentary on the iconography of images in our society.

The rotating sculpture by Marnix de Nijs & Edwin van der Heide is a sinister bar-type barrier which responds to visitors with movement and sound, appearing to attack them like some aggressive animal. David Jablonowski produces a special installation for the exhibition. His work emerges from a sculptural tradition but incorporates influences from the digital 3D world. Even Jasmijn Visser’s huge drawings betray the influence of the digital revolution. Her highly detailed, meticulous, minutely changing depictions of tanks, aircraft, ships and electricity pylons constitute an inquiry into the iconography of graffiti, comic strips and animated films.

The members of the 2008 jury were Marten Jongema, Xander Karskens, Julika Rudelius and Lucas van der Velde. It was chaired by Andreas Broeckmann. Up to last year, Broeckmann was Artistic Director of the Transmediale international media art festival in Berlin; he has also worked for V2 in Rotterdam and writes about art, digital culture and the post-media world.

The exhibition will be accompanied by a publication of the same title, containing an essay by Andreas Broeckmann. The exhibition is being part-funded by the City of Amsterdam