Ayse Erkmen, Ceal Floyer and David Lamelas are united by an approach that follow a reduced grammar of form. Their individual handling of time and space, their preoccupations with limits and possibilities for the creation of alternative communications and cognitive processes has been the motive of this show. For "Collection Selection" they choose a selection of works from the collection of the Emanuel Hoffmann foundation, presented in a separate space of the museum: Mark Wallinger, Roni Horn, Lucio Fontana, Barnett Newman and many others. 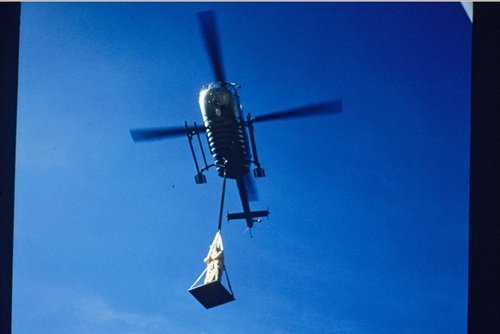 The three artists Ayşe Erkmen (born, 1949), Ceal Floyer (born, 1968) and David Lamelas (born, 1964) are united by an artistic approach that follow a reduced grammar of form. Their individual handling of time and space, their preoccupations with limits and possibilities for the creation of alternative communications and cognitive processes has been the motive of this group exhibition. The exhibition title Above – the – Fold[1] refers to an artistic strategy, for the creation of works, in which the surface structures, on the one hand, follow the semantics of the exhibition space and transform it, and on the other, refer beyond their own form to contexts, which often only become legible in the works’ subtexts.

Lamelas numbers amongst the pioneers of conceptual art and had already created significant works by the end of the 1960s establishing the hybrid character of the exhibition location. The use of a variety of media is characteristic of his way of working and incorporates sculpture, performance, photography and film. David Lamelas’ work Dos Espacios Modificados (two modified spaces) is to be reconstructed for the first time for this exhibition (after more than 40 years since its inception). It can be regarded similarly both as starting and turning point in Lamelas’s unique oeuvre. His contribution representing Argentina in the 1967 São-Paulo Biennial conceived as a critique of the tradition of an installation institution won Lamelas international recognition. It addressed Oskar Niemeyer’s spiral- formed spatial conception of the exhibition hall and thus the cultural and societal significance of a building that was one of the first modernist constructions of the post-war period. Corner Piece (1966) and Límite de una proyección I (Limit of a projection, 1966) are also architectonic interventions in which the architecture itself or the limits of the medium are made the subject of the work.

Ceal Floyer’s works, which are composed of light projections, videos, audio pieces, paper works and sculptures stimulate certain associations evoked by incongruities between object and denotation. The formal constructions are simple and reduced to a bare few elements. Frequently the same materials are used in her installations so it is much more the case that the technical apparatus itself is determining as constructor of the word game and the work itself. A renowned work by Floyer, Door (1995) created from an arrangement of light, electricity cable, door and projector simply throws a strip of light from along the crack at the bottom of a door. It corresponds to the notion of light shining from a neighbouring room. The ambiguity in the game of deception is also borne in the title. The word “Door” itself does not evoke something like “light” – what one sees is a door upon which light is beamed. In turn a video projection, newly developed for the exhibition situation, titled View Point takes up a situation from everyday life, by scrutinizing the “taken for grantedness” of its own visual perception.

Ayşe Erkmen’s works are often the result of intensive examinations with specific locations and are conceived exclusively for the length of an exhibition. In her installations and architectonic interventions she concentrates on the divergent legibility of their societal and historically implied architectures and surroundings. For this concrete situation she has created some new works which respond to existing structures of the museum building in varying designs. One Half Each describes in a few words everything that the work deals with: three carpets, which were made in Istanbul - her hometown – trace the particularly eye-catching ground plan lines of the three floors of the new building in half scale. On the top floor, laid over one another, woven in luminescent colour, they reproduce the abstract two-dimensional image of the floors crossed beforehand. The temporary nature of her works is expressly legible here - only with great difficulty could the works be adapted for other spaces. The respective dependence of the objects on the context of their origins and location of their presentations, become the explicit subject.

[1] In newspaper jargon this means the “lead” or “front-page story”.

An accompanying magazine is to appear for the exhibition. It is simultaneously the opener for a substantial publication titled Above – The – Fold, published by Hatje Cantz publishers (German/English) in July, 2008, featuring texts by Nikola Dietrich, Kassandra Nakas, Jacob Lillemose and Jan Verwoert.

Parallel to the exhibition “Above-the Fold” the Museum für Gegenwartskunst is beginning a new series of exhibitions entitled “Collection Selection”.

The artists participating in the temporary exhibitions will be asked to choose a selection of works or just an individual work from either the collection of the Emanuel Hoffmann foundation or the Öffentliche Kunstsammlung, which will then be presented in a separate space of the museum or included as an integral part of the exhibition. The choice made by the artist and its staging within the space enable a quite different form of presentation and facilitate an altered approach to the, for the most part, well known works of the collections.

This interweaving of newly created works with those of the collections offers the possibility to incorporate the works of the collection into the flow of contemporary art currents and set them into constant movement. At the same time it is a means for disclosing fascinating references, artistic methods of appropriation and influences between fellow artists or making historical predecessors visible and putting them in relationship to one another.