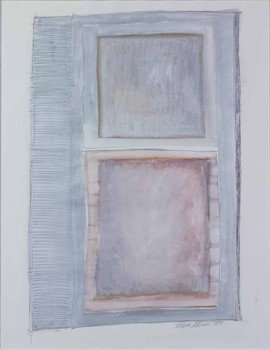 LAUFFS COLLECTION
Selections from the Collection of
HELGA & WALTHER LAUFFS

A metaphor for memory, for a life looked back upon, LOUISE BOURGEOIS’s La Rivière Gentille (2007) is an astonishingly beautiful series on paper that wraps its way in three tiers around the upstairs gallery. Made up of 42 mixed media sheets, each almost a metre long, the series interweaves imagery and phrases from a text the artist wrote in the mid-‘60s which looks back upon her childhood in France. Moments of ecstasy, vivid incidents and dark passages are recollected in a liquid palette of blue, red and black, which snakes its way across each individual sheet. Bourgeois dwells upon sensate experience – the physical world of things and the pleasure they bring – whilst summoning the inexorable, onward flow of existence.
Bourgeois has always lived by a river. From the Creuse in Aubusson, to the Seine in Choisy-le-Roi, to the Bièvre in Antony, the river played a crucial role in her childhood. The water’s high tannin level was needed for the family’s business of tapestry restoration. Bourgeois remembers the dyed skeins drying in the trees. She remembers the colours of the flowers of the garden that her parents planted along the river’s bank.
Like all of Bourgeois’s imagery, there is contradiction. While water can be a metaphor for the origins of life, the passing of time and reverie, it also stands for destruction, the black well of depression, and a place to commit suicide. Bourgeois’s images of rivers are like the umbilical cord that ties her to her mother. The river acts like an unbroken thread that weaves the past and present together.
In all of Bourgeois’s works, colours and motifs are imbued with emotional meaning. Blue represents peace, meditation and escape; black its opposite; and red blood and insistence. The gentleness of the title is borne out through imagery. Pencil-drawn horizontal lines traverse the sheets like the staves that mark music paper, a device that also features in the portfolio work Nothing to Remember (2004 – 6) and of which Bourgeois has explained: 'it is very peaceful to look at the lines of the staff paper. It gives a rhythm…. it gives a passive direction to the horizontal plane and it gives an active direction to the vertical plane.' Often the meandering course of a river is described as hundreds of corpuscular forms, strongly suggesting the vessels of the body. These relate to the 'cumuls', cloud-like shapes that have been a recurrent feature in Bourgeois’s work since the late 1960s that she values for instilling a sense of reassurance and calm. Lines, flowing through all of La Rivière Gentille, are themselves a source of comfort: ‘The repetitive motion of a line, to caress an object, the licking of wounds, the back and forth of a shuttle, the endless repetition of waves, rocking a person to sleep, cleansing someone you like, an endless gesture of love.’
LOUISE BOURGEOIS was born in 1911 in Paris. She is widely recognised as one of the most important artists working today. Over a long career she has worked through most of the twentieth century’s avant-garde artistic movements from abstraction to realism, yet has always remained uniquely individual, powerfully inventive and at the forefront of contemporary art. An extensive retrospective of her work opened at Tate Modern last year (10 October 2007 – 20 January 2008), and is touring to the Centre Pompidou, Paris (5 March – 2 June 2008), the Guggenheim Museum, New York (27 June – 28 September 2008), LAMoCA, Los Angeles (25 October 2008 – 25 January 2009) and the Hirshhorn Museum & Sculpture Garden, Washington D.C. (26 February – 17 May 2009). A solo show of Bourgeois’s work will take place this October at the Museo Nazionale di Capodimonte, Naples.
Nothing to Remember, an artist’s book featuring 22 delicately coloured prints published by Steidl Hauser & Wirth, is available from the end of April.
Selections From the Collection of Helga and Walther Lauffs, an exhibition featuring major works from Pop Art, Arte Povera, Minimalism, Post-Minimalism and Conceptual Art, can be seen concurrently in the downstairs gallery.