For the exhibition, the artist produced a photographic novel and a video featuring appearances by artist and musician friends of his like Raymond Pettibon and Karen Black. The protagonists are beamed back and forth in a collage technique between modernist villas in Palm Springs, ski lifts in the Tyrolean town of Ischgl, and the Paris Bar in Berlin. 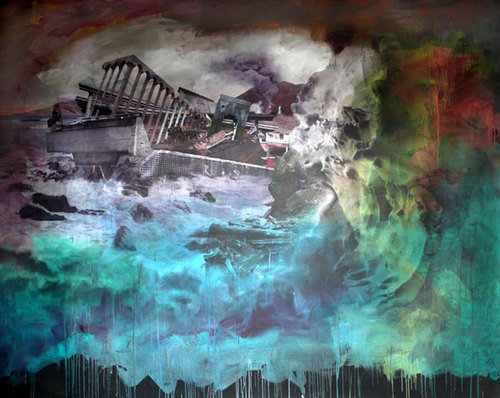 A glance at the printed matter lying around in Hans Weigand’s Vienna studio gives a first hint of the elements that make up his visual world. There are comic books about U.S. sci-fi hero The Silver Surfer, coffee-table books on golf courses, surfing magazines and monographs on early Flemish painting. Ever since his psychedelic underground beginnings, the Tyrolean artist has been sounding out the place where rock mythology, occultism and media-determined urbanism meet, always drawing on new compositional approaches and printing techniques but modeling his work on the imagery of pre-modern painting. In the earthly and paradisiacal landscapes of the 16th century, above all in the apocalyptic visual narratives of Hieronymus Bosch, Weigand comes upon formulas for his visualization of the present-day catastrophic alloying of pornography and war.
This painting tradition enables him to unwind various narrative threads in a single painting. Tanks and martial artists, for example, transform a golf course into a fortress; armored sedans and war memorials on the lawn complete the inventory of a landscape pervaded by symbols of power. The Elysian fields of the super rich merge with the Tartarus of Guantanamo Bay.

Further sources of inspiration for Weigand’s apocalyptic theme parks are the dreary steppes of the poor and the idyllic realms of the rich in the trash science-fiction movie Zardoz (1974). In the exhibitions Cotton (2001) at the Museum Ludwig in Cologne and Jerry Cotton (2002) at the Vienna Secession, Weigand drew on another product of popular culture, the FBI agent Jerry Cotton, who was invented in the 1950s by a German publishing company and made into the hero of a series of crime novels in a projection of a Cold War American gangsterland. For the exhibition, Weigand produced a photographic novel and a video featuring appearances by artist and musician friends of his like Raymond Pettibon and Karen Black. The protagonists are beamed back and forth in a collage technique between modernist villas in Palm Springs, ski lifts in the Tyrolean town of Ischgl, and the Paris Bar in Berlin – imitation gangster lingo and cheap, B-movie atmosphere thrown in. Weigand is keen to avoid smooth surfaces and excessive aestheticism.

Weigand’s visual syntheses come about in small steps. At first he collects details from published material and his own photographs, which he assembles on the computer screen and prints out. Then the actual painting process begins. Weigand subjects the printout to a wash of brushstrokes, contrasting the photorealistic details with gestural traces of paint. The result is then photographed and the process begins again, giving rise, layer by layer, to a visual composition that is half abstraction, half recognizable landscape, in which, for example, a surfer functions as staffage. Weigand’s visual manipulations are never carried out for their own sake, but to illuminate the gaps in smooth digital surfaces through which the witches, monsters and specters of popular culture come crawling.

As a trained graphic artist, Weigand is mindful of the formats he uses for his hybrid compositional procedures; he prints abstract ufological symbols onto blow-up furniture, in reference to the cosmos-and-plastic fashion of the 1960s. His apocalyptic parks are printed on large-format rugs in the tradition of Gobelin tapestries of war scenes. To mark the 200th anniversary of the death of the Tyrolean freedom fighter Andreas Hofer, he is planning a cyclorama for the Landesmuseum Ferdinandeum (Tyrolean Provincial Museum), a contemporary variation on the 19th-century panorama of the Battle of Bergisel at Innsbruck. As a kind of warm-up exercise he presented the motif of a pre-industrial army in a painting on the subject of Alternative Heroes, in which he collaged photographs of rock guitarists cocking their instruments like cowboys their guns. When it comes to exposing the interrelations between pop culture and art history, Hans Weigand is unbeatable.
Matthias Dusini