Art and Tactical Magic. The group exhibition presents works by a group of international artists who are interested in magic as a semiotic exercise. The show sets out to document a new interest that contemporary art production has taken in magic and the occult. On show Jonathan Allen, Marcel Breuer, Center for Tactical Magic, Erich Consemuller, Roberto Cuoghi and many others. Curated by Chus Martinez. 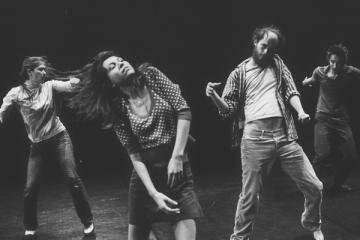 The group exhibition 'The Great Transformation' presents works by a group of international artists who are interested in magic as a semiotic exercise. The show sets out to document a new interest that contemporary art production has taken in magic and the occult. Magic is presented here as a 'tactical' subject that can help us to understand the role of the artist and that of the viewer as a participant in the production and mediation of knowledge.

Beside works of well-known artists such as Allen Ruppersberg and Mike Kelley, 'The Great Transformation' presents numerous works of younger artists, who will develop new works for this exhibition. The artists articulate how magic can be employed as a methodology with a critical potential to challenge our views on society and notions of communication. Through a subject like magic, we gain a new perspective into the organization of social space, into the existence of grey zones between the rational and the irrational. In search of new ways of seeing and new channels for communication and cultural action, contemporary art production is conscious of the present ideological difficulties that deal with magic or the occult.

The Berkeley-based art collective 'Center for Tactical Magic' (CTM), founded by Aaron Gach, for example, aims to activate energies towards "positive social transformation" with the help of community-based projects and workshops in the public sphere. The direct involvement of the audience plays a significant role for this group of activists. Using practical aspects of 'tactical magic' as a fusion of different forces, CTM actively addresses individual, collective and transnational communities.

The French artist Aurélien Froment investigates disparate personal portraits and refers to aspects of magic and analyses special professional skills of handling images. Froment’s film Théâtre de poche, which was produced in November 2007 is linked to a comprehensive book project. In the film a magician introduces a series of card tricks and pictures, which seem to hover in a black environment. In the same way in which the magician is shifting his photos, cards and pictures above an invisible area, he and his surrounding become displaced on an imaginary axis in the film.

The works featuring in 'The Great Transformation' confront the spectator less with the visible but rather with the sensual and intuitive. The exhibition thus establishes a narrative of various possibilities for
cultural analysis.

The exhibition has been produced in collaboration with MARCO, Museo de Arte Contemporánea de Vigo, where it will be on view from September 19, 2008 to January 11, 2009.

SPONSORS: 'The Great Transformation' was made possible by the support of the American Center Foundation and by the Hessische Kulturstiftung. Partners of the exhibition are BDAP - bureau des arts plastiques, CULTURESFRANCE, Ambassade de France en République Fédérale d'Allemagne and The Danish Arts Foundation.

CATALOGUE: A catalogue with contributions by Lars Bang Larsen, Simon During and Chus Martínez will be published in German and English on the occasion of the exhibition.