Artist stayed in London for one month and produced a new series of work based on his encounters and impressions of the city. This new exhibition consists of the series of work that was created as a result of this residency. Qiu Jie's works consists of painstakingly intricate pencil drawings executed on a massive scale and a series of portraits reflecting those people most important and influential in his life. 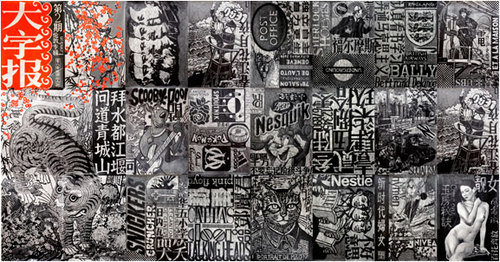 The Red Mansion Foundation is pleased to present an exhibition of works by the artist Qiu Jie at its space in 46 Portland Place. In October 2007, The Red Mansion Foundation invited Qiu Jie to London to take part in an artist residency as part of our wider programme of exchange activities. Qiu Jie stayed in London for one month and produced a new series of work based on his encounters and impressions of the city. This new exhibition will consist of the series of work that was created as a result of this residency.

Qiu Jie was born in 1961 in Shanghai. He graduated from the School of Decorative Arts in Shanghai in 1981, and then furthered his education at the School of Fine Arts in Geneva, in 1994. Qiu’s work is exhibited regularly at an international level, in Switzerland, France and China. He has received many prizes and distinctions, including a scholarship by Cite des Arts in Paris, and the Federal Fine Arts Prize in 1995. His work continues to be acquired by numerous contemporary art foundations (such as the Saatchi Gallery), museums, and private collectors. Recent exhibitions of his include a solo show at the Arrario Gallery in Beijing in 2008 and the Shanghai Biennale in 2006.

Qiu Jie’s works consists of painstakingly intricate pencil drawings executed on a massive scale, some reaching up to 10 metres in width, and a series of portraits, over eighty in number, reflecting those people most important and influential in his life. Taking anything between six months and a year to complete, Qiu’s pencil drawings are works of substantial achievement and endeavour. Yet despite their vast size, the breath taking detail and agile delicacy of these drawings makes for a very subtle and tantalising visual delight. The viewer is teased, our eye drawn on a diverse path through a melting pot of iconography, from titillating images of female sexuality to James Bond, from Pink Floyd album covers to Cultural Revolution soldiers. There is a playful and irreverent quality to his images; the convergence of culturally iconographic traditions from East and West creating a unique style, much like China itself. Yet when we look to the creator of the works themselves for some understanding, we are diverted once again- Qiu jokingly refers to them as “just high quality wallpaper”.

Despite the more personal aspects to his work, especially the series of paintings that focus on important people in his life, including his son, Qiu Jie still refers to himself as an outsider- his name is in fact a pseudonym, meaning “foreigner”, or “hermit”. There may seem to be a dichotomy then, for an artist to take a name that means “outsider”, yet whose work is deeply informed by tradition. One might wonder what role does tradition have in an increasingly rootless and scattered global culture? This perception of the world does not hold true for Qiu Jie however; his casual reply is not to worry, for no one can truly escape their roots.

The Red Mansion Foundation is a not-for-profit organisation, which promotes artistic exchange between China and the UK through a programme of lectures, exhibitions, The Red Mansion Art Prize and “Building Bridges”, an exchange programme for established artists. The Red Mansion Foundation was co-producer and co-sponsor of “China Power Station” (held at Battersea Power Station), “The Real Thing” at Tate Liverpool, the Chinese Pavilion at the 52nd Venice Biennale and the 10th Istanbul Biennale, 2007, and curator of the British Pavilion at the Beijing Biennale in July 2008.

CHINA NOW, the UK’s largest ever festival of Chinese culture, is a 6-month nationwide celebration of over 1000 Chinese events including exhibitions, performances and activities spanning Chinese film, cuisine, comics, art, literature, music, design, science, technology, business, education and sport across the UK. It is an independently funded, non-profit organization which aims to build partnerships between artists, cultural leaders, schools, businesses and communities across UK and China.