Mirror Image. The first solo exhibition in the UK by Colombian artist is an Iniva exhibition at Rivington Place. A body of work selected from the last ten years that evokes memory and human loss. Often using the light-sensitive tendencies of photography and the moving image, his work is imbued with a transcendental quality. Four works will be installed in the Barclays Project Space and the other works as well as the screenings will be shown in Project Space 2. 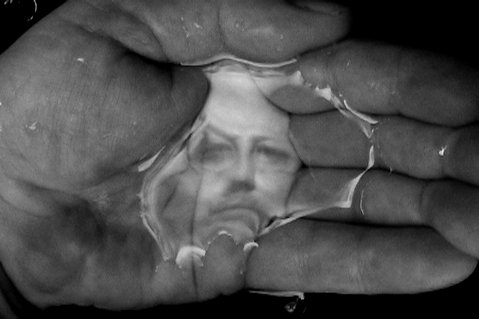 Oscar Muñoz's solo exhibition is an Iniva exhibition at Rivington Place. Four works will be installed in the Barclays Project Space and the other works as well as the screenings will be shown in Project Space 2. It has an accompanying public programme which has been realised with support from Arts Council England.

Iniva presents Mirror Image, the first solo exhibition in Europe by Oscar Muñoz, one of the leading artists on Colombia's dynamic art scene.

Themes of memory and human loss permeate Oscar Muñoz's work to compelling and seductive effect and are made apparent through his mode of production. Often using the light-sensitive tendencies of photography and the moving image, his work is imbued with a transcendental quality. Central to Muñoz's work is the impermanence of the image, creating apt metaphors for the human condition, time and memory. Muñoz says: My work insists [...] in documenting an immemorial scenario: the ‘logic of everyday thinking' that stems from the impossibility of retaining and fixing images permanently.

Born in Popayan and now living in Cali, Colombia, Oscar Muñoz's work challenges the viewer to rethink the meaning of the photographic image. Photography forms the basis of much of his moving image work, but he also employs more traditional techniques like drawing, and materials like charcoal to realise compelling and seductive works.

Whilst Muñoz's work subtly alludes to the impact of the war in Colombia - a country immersed in political and social turmoil for over 50 years - his themes have a more universal appeal. Muñoz reinforces this: My work today arises from my interest in understanding how a society comes to accept war - or rather, a dark and corrupted succession of wars over more than 50 years and which have not yet ended - as part of the routine of living, where both the past and the present are plagued with daily violent events which are persistently repeated.

The exhibition comprises six of Muñoz's most telling works from the past ten years. In Proyecto para un memorial (Project for a Memorial) (2005), one of the larger pieces in the exhibition (a five-screen projection), Muñoz draws on a hot pavement in Cali, copying photographs from newspaper obituaries. He draws the portraits using water and as one nears completion, the earlier images evaporate - and he starts all over again.

In Aliento (1996-2002), mirrored discs are mounted on a wall. The glossy surface invites the viewer to look deeper and blow onto it. A soft breath blown onto glass reveals faces - from photographs in Colombian newspapers - which disappear as the mist diminishes.

Also in the exhibition are some of his recent installation works. These include facsimiles of the front pages of the two leading newspapers in Colombia (El Pais and El Tiempo) where the artist has burned the image and text onto the surface of the paper. As each page is turned, the image gradually fades.

Eclipse is an installation that employs camera obscura to startling effect by reflecting the street life of Shoreditch into the gallery space. As the viewer gets closer to the work, what appear to be luminous static images is in fact activity on Rivington Street where Iniva is located.

The public programme includes talks, films selected by Oscar Muñoz, and video works by Colombian artists who have exhibited previously at Lugar a Dudas, the artist-run space established in Cali by Oscar Muñoz.

Learning
Through Iniva's award-winning learning programme, different groups of people of all ages will have the opportunity to engage with Oscar Muñoz: Mirror Image through talks, professional development and creative engagement workshops.

Appearing to Be is a project by artist Juan Pablo Echeverri specifically commissioned to coincide with Mirror Image. Through this intergenerational project Iniva will involve Latin American people living in London giving them an opportunity to explore changing identities through photography. The process will be mapped and the final work will be on display at Rivington Place during the Oscar Muñoz exhibition.

Library & Archive
Complete documentation of both Oscar Muñoz's work and the exhibitions at his art space in Cali, Lugar a Dudas, will be on display in the Stuart Hall Library. Also available will be books, magazines and catalogues documenting the visual arts in Colombia and other Latin-American countries over the last forty years.

Iniva (Institute of International Visual Arts) creates exhibitions, publications, multimedia, education and research projects designed to bring the work of artists from culturally-diverse backgrounds to the attention of the widest possible public. (http://www.iniva.org)