Tales of Time and Space 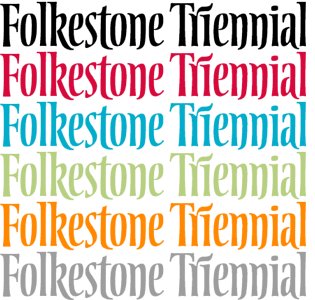 Internationally acclaimed contemporary artists including Christian Boltanski, Tracey Emin, Mark Dion, Jeremy Deller, Tacita Dean and Mark Wallinger have been commissioned to create new works for the first Folkestone Triennial, Tales of Time and Space, which will open on 14 June and run until 14 September 2008.

Following site visits in Spring 2006, the invited artists have developed proposals for the inaugural Triennial which engage with Folkestone’s colourful history, culture and built environment. The East Kent coastal town of Folkestone has long been a creative centre. Historically it has attracted luminaries as diverse as Charles Dickens, Derek Jarman, Jimi Hendrix, Marcel Duchamp and a host of 20th century literary figures from H G Wells to George Bernard Shaw and Samuel Beckett.

The inaugural Folkestone Triennial will include both temporary works, which will remain in situ for the three months of the exhibition, and a number of permanent works. This pattern will be repeated in subsequent Triennials so that, over time, Folkestone will become a true creative centre for contemporary art of the highest calibre. The Triennial is conceived and led by curator Andrea Schlieker, co-curator of the British Art Show 6, and aims to examine changing notions of art in the public realm.

An extensive Outreach programme, together with guided art walking tours, talks and workshops will be running throughout the 91 days of the Triennial.
An illustrated 128pp catalogue with an essay by the curator Andrea Schlieker and short texts by all of the artists will accompany the exhibition.

The Folkestone Triennial forms a major component of the creativity and arts-led regeneration of Folkestone which is being driven by The Creative Foundation, chaired by leading UK philanthropist Roger De Haan, former chairman of Saga. Other elements of the regeneration programme include a Foster + Partners Masterplan for the redevelopment of the harbour and seafront, a new 38m GBP City Academy specialising in the arts, a new University campus with a strong focus on arts courses, a new performing arts centre, and a Creative Quarter with over 100 artists already established in a growing number of refurbished studio, living and retail spaces. A new high-speed rail link from London will open in 2009.

There will be a special firework display at 10.30pm on Friday 13th June to celebrate the start of the Folkestone Triennial. Good views of the fireworks will be possible along Folkestone's coastline - from the East Cliff to the Leas and beyond.