On 1 July 1946, a US American B-29 dropped the first post-war atom bomb onto Bikini Atoll. Thus Bikini Atoll gave the name to a new fashion in bathing suits. The taboo was broken, and the striking name, which translates as "land of the coconuts," itself had the effect of a bomb. 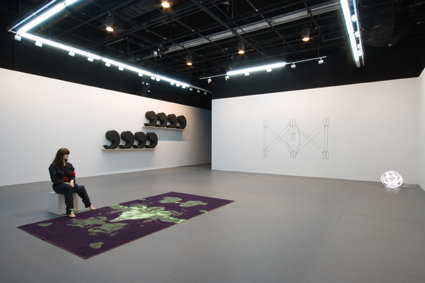 The oeuvre of Swiss artist Mai-Thu Perret (born in 1976), who works in New York and Geneva, operates within ideological and visual frames of reference pertaining to modernism and its revolutionary potential. From the perspective of the producing recipient -- Perret did not formally study fine art, but rather English literature, only later to take part in the Whitney Independent Study Program -- the artist is interested in twentieth-century avant-garde movements and their vocabulary, insofar as it stands for emancipation and a belief in progress. Since 1999 Perret has been writing /The Crystal Frontier/, a fictional report in the form of a journal about a group of young women who have founded an secluded alternative commune somewhere in the desert in New Mexico. In conjunction with writing, Perret also creates sculptures and installations, often as hybrids between art, handicraft, design, and literature, which she identifies as hypothetical products by the protagonists of this fictional community. Perret transfers her own artistic authorship onto imaginary subjects that she herself has created. Following on from Perret's 2006 exhibition /Apocalypse Ballet/ (2006), in which the artist transformed the exhibition space into an avant-garde stage set with four paper maché mannequins in frozen dance movements, Galerie Barbara Weiss is now pleased to present a second solo show by Perret entitled /Bikini/. Perret's work enjoys international renown, and she recently exhibited in the Kunst Halle Sankt Gallen and in the Bonnefanten Museum in Maastricht.

On 1 July 1946, a US American B-29 dropped the first post-war atom bomb onto Bikini Atoll, thus marking the start of extensive testing. Only a few days later the French fashion designer Louis Réard sent model Micheline Bernardini down the catwalk in Paris, wearing only four small triangles of fabric that were printed with newspaper reports about the dropping of the bomb. Thus Bikini Atoll gave the name to a new fashion in bathing suits. The taboo was broken, and the striking name, which translates as "land of the coconuts," itself had the effect of a bomb. The very skimpy new bathing suit -- "like the bomb the bikini is small and devastating" -- was greeted with similar moral outrage to the American atom bomb testing on Bikini.

By choosing this loaded and historically significant name for her exhibition title, Mai-Thu Perret refers to precisely these events. She places three varnished sculptures shaped like atomic mushroom clouds in the centre of the gallery, alluding to a well-known and often reproduced 1946 photo. This shows Admiral Blandy, the officer who was responsible for the test, and his wife celebrating the completion of the /Operation Crossroads/ test series with an enormous edible "atomic cake". By citing precisely this cake, Mai-Thu Perret recalls the inflationary and unscrupulous belief in progress that was current in the USA at the time, an ideology that had no notion of sustainability. The original atomic cake was a remarkably naive object created with simple non-technological means, and an ambivalent and provocative symbol of a narcissistic belief in simple and straightforward progress. Translated into artistic/applied art products, Perret's atomic cakes go a step further. They appear to be simple, childish handicrafts, a "cake-like" approach to sculpture in a frozen varnished piece of art. The colour textile banners that Perret has hung on the gallery walls are similarly ambivalent. The embroidered brick motiv is dissolved by the softness of the fabric and the folds of the material.

In addition, Mai-Thu Perret shows a silkscreen print with the pattern of the first bikini designed by Louis Réard and original drawings from her /Black Noise Book/, which is part of a series that she published together with John Armleder and Amy Granat in memory of their deceased friend Steven Parrino.

As the artist herself says, the exhibited objects are not directly connected to /The Crystal Frontier/. But they do have some similarities; they share a fascination for mystical phenomena (in this case the possibility of the total destruction of identity by the atom bomb) and also the creative reduction of symbols to simple techniques and motifs. The question of the significance of the female body is also a key concern of the artist in /Bikini/. A further aspect that connects the /Bikini/ exhibition with /The Crystal Frontier/ is the fact that later American nuclear tests took place in the North American deserts, in Death Valley or New Mexico. As Perret's invented women's commune is also supposed to be located somewhere there, then this represents a certain continuity -- of secrecy and isolation.