Her multifaceted work can be summed up as a search for the new dimensions that representation has acquired in the information culture since the beginning of the 21st century. Due to the crucial role gender issues play in her work, this search is also characterized as a feminist one. 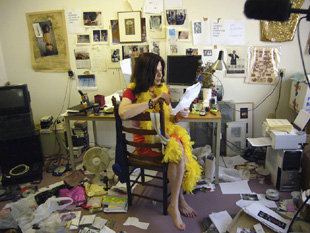 We are delighted to announce the second solo exhibition by Elke Krystufek at the gallery.

Elke Krystufek’s multifaceted work can be summed up as a search for the new dimensions that representation has acquired in the information culture since the beginning of the 21st century. Due to the crucial role gender issues play in her work, this search is also characterized as a feminist one. Krystufek once described herself as ‘naked and mobile’. In her early work, she made public all the steps that she took in life and the world. ‘I have decided to make my life an artwork. I don’t have a private life. Everything is public’, she once declared. Her work from this time can be seen as an ultimate attempt to free herself from her own limitations and escape from the straitjacket of societally imposed role models, norms of behaviour, and other models of expectation. She constantly explores and oversteps the boundaries between the private and the public. Based on this method and the work that she has created up until today, there is an underlying paradox that is perhaps one of the most recognisable contemporary human conditions in the current information culture. While Krystufek makes everything public, she also veils everything. In her series of photos, paintings, and videos, the artist may be unashamedly frank and communicative, but we actually learn little about the person of the artist herself. Images of one’s self do not tell much, as she shows. What we read in these images is highly subjective, changeable, and dependent on our own social, political, or cultural backgrounds. The (self’s) body is, for Krystufek, a projection screen for desires, biases, and stereotyped ways of seeing things that the viewer may indulge in. I am your mirror is thus the title of what is perhaps Krystufek’s most shamelessly exhibitionistic work: a photo journal from the 1990s containing several thousand photographs.

Even in her new work, in which Krystufek’s image has gradually been relegated to the background and text plays a more determining role, as absent subject and director she puts the specific thing we are looking at in a crucial place. The central piece in the exhibit at the Galerie Barbara Thumm in Markgrafenstrasse is the 45-minute-long A FILM CALLED WOOD. It is an experimental film which flouts all the conventions of Holly- and Bollywood, to which its name refers. This film also has the impenetrable structure of a wood: there is no continuous story or cohesive plot. Rather, there is a succession of separate scenes and monologues. The British writer Virginia Woolf and the Dutch artist Bas Jan Ader, both of whom died by drowning, appear together in a sort of afterlife, surrounded by angels. The associated texts are spoken by actors who only half coincide with their characters. Each character is played by various actors. The setting of the film alternates between Amsterdam, Berlin, Stavanger, Vienna, South India, Italy and Portugal.

In her recent work, Krystufek brings together all possible existing and self-created images, texts, and characters, in order to create new arrangements. She thus creates a polyphonic forum and a mixed form between different artistic genres. For example, she describes A FILM CALLED WOOD not only as an avant-garde film, but also as a ‘very long song’, performance, or even as a painting. The result is an artistic and informational middle-ground in which meanings are always shifting, and that, in terms of structure, is most akin to the Internet. The other works in the exhibition at the Galerie Barbara Thumm in Dircksenstrasse are, according to the associative logic of the film, more or less connected in some way with A FILM CALLED WOOD. Protagonists from the film and parts of the script appear in paintings; one drawing shows Nicole Kidman playing Virginia Woolf in The Hours. It is undoubtedly due to Bollywood associations that Krystufek depicts herself in one of her paintings as Lakshmi, Hindu goddess of wealth, luck, love and beauty. It’s as if she wishes to say that we even model our gods after our earthly wants.
Text: Roel Arkesteijn