Unconcerned But Not Indifferent 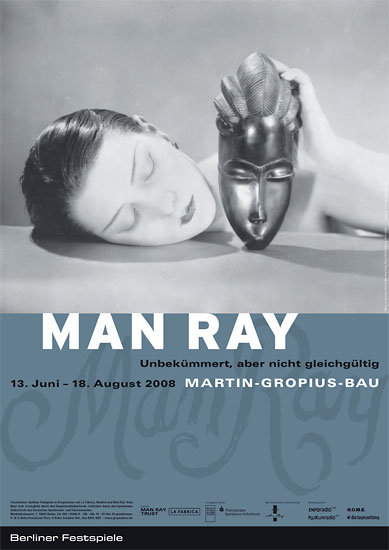 The Man Ray Trust collection
After his death in 1976 Man Ray’s estate passed into the hands of his wife, Juliet, who was joined by her brothers in setting up the Man Ray Trust to preserve and promote the artist’s legacy. Part of the estate was donated to the French national museums, while the trust selected artworks, objects, documents and personal items for the American collection designed to provide a comprehensive overview of Man Ray’s creative period spanning over 60 years.

The trust has so far catalogued over 2,000 works and confirmed their authenticity. However, research work into all the facets of the collection has not yet been completed. Man Ray: Unconcerned But Not Indifferent is the first exhibition to provide a comprehensive insight into the collection. The unique feature of the trust’s collection is that it encompasses items from all Man Ray’s creative periods, including little-known early works, documents from his private life, sketches for large-scale works and their documentation as well as numerous masterpieces. As was stated in an article about the trust in the magazine ArtNews in June 2002, the collection is “perfect”.

Profiting from the abundance of material available in the Man Ray Trust, the exhibition looks at the development of numerous motifs from sketches up to the masterpiece and shows the occasional use Man Ray made of photographic material for paintings and works of graphic art. The exhibition also gives visitors an opportunity to form a picture of Man Ray’s life and his creative processes. Among the objects on display are personal items, such as pieces of jewellery that Man Ray made for his wife Juliet, private letters, drawings and manuscripts, including two early drafts of Man Ray’s autobiography, a formula for photographic chemicals and a patent application for a magnetic chess set. Also on show are documents never exhibited before, which Man Ray used as source material for his paintings and prints, as well as proofs containing comments Man Ray made for himself and his printers. These exhibits are assigned to the finished works to which they refer, thus offering a new insight into Ray’s life and artistic work.

The Unconcerned But Not Indifferent exhibition has been arranged in accordance with Man Ray’s four creative periods: New York (1890–1921), Paris (1921–1940), Los Angeles (1940–1951) and Paris (1950–1976). It begins with New York and a collection of proofs from Man Ray’s personal card files, in which he kept a record of his early works. These card files, the originals of which were stolen from Man Ray’s studio after his death and have never reappeared, were the subject of considerable controversy and have never been exhibited before. Wherever possible they are assigned to the works they document. Among the items on display from Man Ray’s years in Paris are the records of his own works and those of other artists, including Duchamp, Picasso, Miro and Leger, as well as a little book of Rousseau’s work that he produced. It was through Rousseau’s work that Man Ray learned to become a photographer, thus enabling him to gain entry to the Paris art world in the 1920s. Most of these works are likewise unknown.

The exhibition contains numerous works from each of the creative periods in Man Ray’s life. Many of the works on display are well known, but have not been seen in public since his death. Thorough research in the trust’s non-catalogued stocks has made it possible for the exhibition to show for the first time a selection from the following hitherto unknown series of works:

* photographic plates from Les Mains Libres with traces of Man Ray’s cutting, dated 1936 and 1937
* documentary footage from France in the 1920s
* a hitherto unknown document of Marcel Duchamp’s Large Glass
* contact prints with traces of Man Ray’s cutting from all his creative periods, black-and-white Polaroid prints from the early 1960s
* a collection of framed colour slides from the time Man Ray experimented with colour photography
* a joint project by Man Ray und Max Ernst consisting of four frottages.

Organizer
Berliner Festspiele in cooperation with La Fábrica and the Man Ray Trust, New York.
With the kind support of the Capital Culture Fund. Made possible by the Sparkassen-Kulturfonds des Deutschen Sparkassen- und Giroverbandes.

With the support of the Bar Man Ray, Berlin.