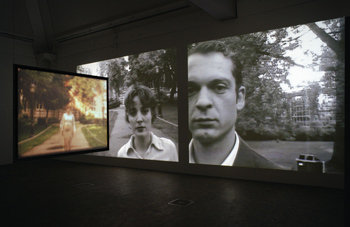 The second part of the Hirshhorn’s two-part exploration of contemporary moving-image art, “Realisms,” looks at a decade of work that demonstrates how cinema—now encompassing such related moving-image media as television, home video and digital entertainment—is a pervasive artistic and social language that complicates rather than clarifies the relationship between fiction and reality. The works of 19 international artists examine some of the traditions and qualities of moving- image media, as well as cinema’s ability to invent new forms, functions and correspondences with the world at large.

“Realisms” is divided into two sections: the first focuses on works that quote global cinema, mainstream television and Hollywood production, while the second examines media representations of historical people, places and events, political propaganda and criminal trials. The exhibition is on view June 19 through Sept. 7 and is organized by Hirshhorn curators Anne Ellegood and Kristen Hileman.

In the first section, works by Candice Breitz, Julian Rosefeldt and Pierre Huyghe refer to, sample from and re-create other cinematic works. In “The Third Memory” (1999), Huyghe gives John Wojtowicz, the bank robber portrayed by Al Pacino in Sidney Lumet’s 1975 film “Dog Day Afternoon,” a chance to recount his version of the events that inspired the film. Huyghe’s work reveals that, as time goes on, Wojtowicz’s memory of the actual robbery has become intertwined with the story as portrayed in Lumet’s film. Rosefeldt’s “Lonely Planet” (2006) tracks the journey of a Westerner in modern-day India, culminating with his participation in a musical number on the set of a Bollywood film.

Runa Islam’s “Tuin” (1998) serves as a transition between the first and second sections of the exhibition. She re-creates a complex shot from Rainer Werner Fassbinder’s 1974 film “Martha” in which an unseen camera circles around a man and woman as they first encounter one another, conveying the dizziness of their fateful meeting. In Islam’s version, cameras and equipment are visible. “Tuin” exposes the techniques used to fabricate cinema’s spell-binding versions of physical and emotional reality.

In the second section of the exhibition, Michèle Magema, Jeremy Deller, Artur Zmijewski and others explore the confrontation between control and freedom in a cinematic age. These artists re-create historical happenings but enable non-actors to interfere with and or take control of cinema’s processes of storytelling and simulation, resulting in works that critique mass media’s filtering of events.

Artists Isaac Julien and Omer Fast look to montage and multiple screens to deconstruct media’s presentation of people, cultures and historic events. Their films do not use traditional narrative structures. Taking as his subject Colonial Williamsburg and its inhabitants, Fast deconstructs the interview format common within the documentary genre and makes apparent the way moving pictures are spaces where we construct and complicate identity and reality. Essential to the delivery of Julien’s montage is the presentation of characters and landscapes in 3-D space across four screens. This phenomenon of proliferating screens is, of course, occurring outside of gallery spaces as well, as moving-image content is presented on movie screens and televisions, as well as on computers, cell phones and other portable devices, expanding the impact of the cinema throughout daily life.

Generous support for “The Cinema Effect” is provided by The Broad Art Foundation and the Audrey and Sydney Irmas Charitable Foundation, with assistance from Marion Boulton Stroud, Lorie Peters Lauthier, the British Council, the Holenia Trust in memory of Joseph H. Hirshhorn, the Friends of Jim and Barbara Demetrion Endowment Fund, and the Hirshhorn’s board of trustees. In-kind support was provided by Sony Electronics Inc.

Related Programs
Meet the Artist talks with Isaac Julien (June 19) and Candice Breitz (June 26) and interactive Friday Gallery Talks offer a range of educational experiences designed to engage people of all ages and interest levels in contemporary art. After Hours (June 20) offers extended hours to view the exhibition (8 p.m. to midnight) and a special live performance by Maxi Geil & Playcolt, a music project conceived by artist Guy Richards Smit. This late-night social gathering attracts large numbers of attendees from around the Washington, D.C., area. The museum’s ever expanding library of podcasts (featured on iTunes in the top 100 Arts and Entertainment podcasts) make walkthroughs and interviews with artists accessible internationally.

Catalog
The fully illustrated catalog includes essays by Ellegood and Hileman, as well as “Dreams” curators Kerry Brougher and Kelly Gordon. In addition, artist Tony Oursler has created a chronology of the moving image. The catalog is co-published with D Giles Ltd, London, a fine arts publisher, and distributed worldwide. It was made possible in part by the Elizabeth Firestone Graham Foundation and Barbara and Aaron Levine.

About the Hirshhorn Museum and Sculpture Garden
The Smithsonian Institution’s Hirshhorn Museum and Sculpture Garden welcomes visitors at all levels of understanding to experience the transformative power of contemporary art. The museum collects, preserves and presents international modern and contemporary art in all media, distinguished by in-depth holdings of major 20th- and 21st-century artists. By collaborating with artists on exhibitions, programs and special projects, the Hirshhorn provides an important national platform in Washington, D.C., for the vision and voices of artists.