In "The People!s Playground", Michael Brown presents a large aluminum cast of a portion of the beach from Coney Island. Artist has been drawn to reproducing simple objects and gestures in minimal, distilled form throughout his artistic practice. "The Stranger" including sculptures by Berlinde De Bruyckere, Richard Jackson, Anselm Kiefer, Koo Jeong-A, Patricia Piccinini, Georgr Segal and Shinique Smith. 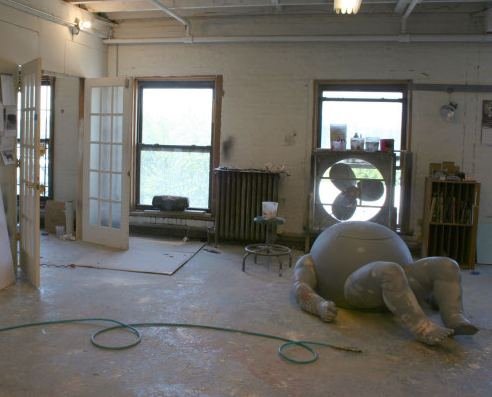 New York, NY, May 17th, 2008 - Yvon Lambert New York is pleased to announce its first exhibition of New York based artist Michael Brown (born 1982, Poughkeepsie, New York). The People!s Playground will be installed in the front gallery at 550 West 21st Street. The title of the piece, The People!s Playground, is the name by which Coney Island, since it!s inception in the early 1800!s, has been known. Coney Island is the small peninsula that hangs from the southern most edge of Brooklyn. Its history has been intrinsically shaped by the immigrants and urban Americans who gathered there, creating their own forms of enjoyment and spectacle, developing into a tourist destination after the civil war. In The People!s Playground, Michael Brown will present a large aluminum cast of a portion of the beach from Coney Island. Brown has been drawn to reproducing simple objects and gestures in minimal, distilled form throughout his artistic practice. His work is often engaged with political subjects represented by everyday objects.

The People!s Playground captures a community in flux. The utopian promise of Coney Island, a public space where many people of different means mix, is threatened. Brown!s minimal sculpture signals the encroaching displacement of the diverse, lively culture, a public space soon to be eradicated by private interests. The piece preserves a transient impression in time in its physiological entirety, the dint of fading footprints and debris in the sand. A simple, banal, repetitive moment is stripped of its cyclical function and value, frozen in the moment. Replicating the human passage through time, intrinsic to this preserved moment is our understanding that the possibility of future impressions does not exist. We will not have the option to partake in the rich history of the People!s Playground. In revealing a history that the on looker may never be a part of, Brown!s work unveils more generally the existence of socio-economic tensions between public and private interest.

About Yvon Lambert: Yvon Lambert opened Galerie Yvon Lambert in Paris in 1967. The Collection Lambert in Avignon opened in 2000 and presents more than 350 works from Yvon Lambert!s personal collection. Yvon Lambert New York was founded in 2003, and in 2007 moved to its current location, designed by Richard Gluckman in collaboration with Thomas Zolli.

“As if that blind rage had washed me clean, rid me of hope; for the first time, in that night alive with signs and stars, I opened myself to the gentle indifference of the world. Finding it so much like myself – so like a brother, really – I felt that I had been happy and that I was happy again. For everything to be consummated, for me to feel less alone, I had only to wish that there be a large crowd of spectators the day of my execution and that they greet me with the cries of hate.”
Albert Camus, The Stranger

Reception for the artist Thursday, June 19, from 6 to 8 pm